Whilst this is Cardiff by bike, it is easy to forget that many of us will be commuting to and from the neighbouring counties. So, in the interests of completeness we had best take a look at what the wider region has in store for us. First up, the Vale.

Just like Cardiff, the Vale has its own Local Transport Plan that takes it up to 2020 and beyond. However, the Vale is enormous and much of it is rural, so the Active Travel Act applies mainly to the big settlements of Penarth, Barry, Llantwit Major, Cowbridge, Dinas Powys, Llandough and Rhoose.

From looking at this plan and, to a greater or lesser extent the Cardiff one, there’s a feeling that they understand what they are supposed to be doing. The narrative recognises the perils of a largely inactive population whom mostly get around in single-occupancy cars. They recognise and even suggest that the answer to most of these problems is walking & cycling. It even recognises that car-dependent societies exclude those whom are unable to afford the costs associated with motoring. 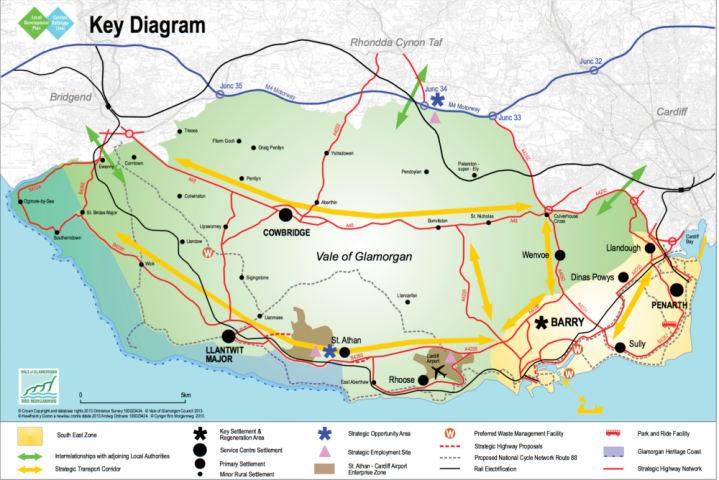 However, much of what is planned between now and 2020 revolves around NCN88, linking Penarth with Barry, the airport and beyond. It may be of use to some commuters, but it’ll be there mostly for people out riding at the weekend. There’s very little mention of what is planned within the individual towns. Perhaps there will be separate plans for Penarth, Barry and the other towns, but that seems like an odd way of doing things. It’s more likely that they are holding off until 2017 when the integrated plans are due.

It’s probably worth mentioning that walking and cycling has been off the radar for councils other than Cardiff up to this point. Cardiff had Sustainable Travel City money with which to develop Enfys and the other councils didn’t. Even so, the positive narrative about the benefits of active travel is not met by a solid set proposals to encourage it, at least not within this plan.

There is perhaps one ray of sunshine in this plan. An off-road cycle route is planned between Dinas Powys and the Biglis roundabout that joins up with Barry and Sully. There are land issues to resolve first, though.