When I first saw last year’s Velothon Wales advertised I knew it was a challenge I wanted to take up. However, as the weekends and months flew by and the latest promise of another health kick failed to get off the ground I realised it was too ambitious. Fast forward six months or so and for various reasons including work, family and an impending milestone birthday I’d decided it was finally time to get my proverbial bottom into gear.

This lifestyle change started in August last year and on New Year’s Day I decided to set some goals. My wife had just signed up for the Cardiff World Half Marathon so I decided to get in on the act of some child free training time by signing up for Velothon Wales 2016.

After “nipping out” for an hour or two my first real training was an 80km effort including the Bwlch. This effort is previously chronicled here.
At the end of this ride, I disliked my bike because my quads hurt and I began resenting the time away from my children. Despite this I ramped up my training by roughly 10% per week and with the lighter evenings I started throwing in an hour ride mid-week too.

By the time the Velothon had come round I was really pleased with how my training had gone. I’d done the Bwlch from all sides, the Rhigos, Caerphilly mountain and Maerdy and my average speed was increasing week by week too. By the time of the event round, I was hoping that through a combination of the sense of occasion, adrenaline and slipstreaming I might be able to complete it in under 6 hours.

In the week running up to the event I found myself actively avoiding carbs in an effort to effectively carb load from the night before. That night I had pasta and pizza and a glass or two of red wine to help the digestion.

That night before the Velothon I was like a kid at Christmas, I was so excited. I had an early night but the sleep was somewhat disturbed by panicking that I was going to sleep in (despite setting my alarm for 5.30).

In the morning I had my usual banana, egg and protein pancakes with peanut butter and a few portions of my homemade nut, seed and date flapjacks that I’d made specifically for the event.
I packed an old jacket pouch with the flapjack and also put in some Goji berries and Harribos and attached the bag to my handle bars.

As trains from Radyr to Cardiff didn’t start until 9 in the day I had little choice but to roll in on my bike. As planned I rode in with one of the other cycling Dads from my daughter’s school. We arrived in plenty of time and we got a place roughly in the middle of Pen G for a 7.36 start time. 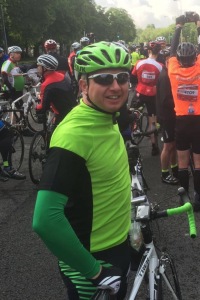 As soon as the event started I was on a mission. I was conscious that I didn’t want to peak too soon. I found myself riding at a faster pace than usual, but I felt comfortable. I was slipstreaming various groups and pairs and passing the time of day with other competitors.

I think I’d done the first 19 or 20 miles in an hour, staggering for me. By Newport, I’d already started on the flapjack in an effort to keep my fuel levels up. I was amazed how much food I actually got through, just eating little and often and I think it really helped me.

Just before the first feed station at Usk I overtook an old cycling buddy, Gareth Lewis who I’d first met on a Cycle Challenge Wales ride a few years ago. As I was in my rhythm and ascending on a busy corner I felt I couldn’t manage more than a quick hello, though.

I enjoyed chatting to other riders all the way round. I would hope my fellow riders didn’t think I was too strange, due to me spontaneously shouting such gems as “Tally – Ho” and “LETS GET READY TO TUMBLE.” Having said that though, I don’t really care. It was all in good fun but it did find the ultra serious riders coming through shouting “ON YOUR RIGHT” a bit off-putting. One rider had a go at another rider for not pulling over. She was in her own zone and just hadn’t noticed. I think I managed a suitable rebuke for Mr Serious, checked she was ok and carried on.

The rain had started and finished by the time of my Tumble ascent effort. I hadn’t done this one in training and found it really tough. I can’t say I noticed my wet clothes and soggy bum much due to the harshness of the climb.

I feel a bit guilty by admitting I took encouragement from those early pushers and slower riders I overtook on the Tumble. It was really tough but I didn’t once consider stopping.
Having topped up my water at Usk I didn’t see any point in stopping at the summit of the Tumble. I enjoyed the fast descent. It wasn’t as quick as I would have liked due to a few more cautious riders in front of me. From there I powered on though and then had just enough in the tank for Caerphilly mountain.

I found this last climb a real struggle. Luckily I was able to pick a path through other riders and maintain my rhythm. It was only through pure stubbornness that I didn’t dismount and join the people pushing their bike up the incline though. According to Strava I even managed a PB on this section!!

I did see one rider take a nasty fall. I think he was clipped in and just couldn’t maintain the necessary revolutions for his chosen gear. I felt bad for not stopping but there were others better placed to help as they were much closer to him and were already pushing their bikes.

I had to stop for water at the top but after that I bombed down into Thornhill across to Lisvane and Llanishen and into the city centre. Including water and comfort stops my circuit was 5 hours 25 minutes, so I smashed the six hour target.

It was awesome to see my wife and children at the end and they were all very proud of me. Until the next planned goal I’ll be restricting weekend rides to a maximum of three hours though to spend more time with the family.

Post event it has been quite a journey for me. I’m really pleased with the progress I’ve made. I hope I’ll further improve on my fitness and speed but I can’t say I harbour any ambition of joining the “COMING THROUGH ON YOUR RIGHT” brigade. I’d much rather do the course in 8 hours and enjoy the day out like my mate Gareth did.

2 thoughts on “Tales from the Velothon 2016: Gareth Thomas”