I’ve been riding around for two years on a battered old bike that I cobbled together from various parts. It started as an ambitious project, but once I had the bike in a rideable condition I lost the motivation to do more. As time went on the components – which weren’t new anyway – began to wear out, leaving me with no choice but to either get rid of the bike or to strip it down and finish what I started.

I’d originally obtained the frame for free when a random stranger replied to a message that I posted on Freecycle. It had been languishing in his basement for a number of years after his son had tried and failed to restore it himself. I couldn’t believe my luck when it turned out to be a genuine Reynolds 531 double-butted steel frame from what my research told me was a 1985 Orbit Gold Medal touring bike.

As I only wanted to use the bike for commuting around the city I wasn’t that bothered about restoring it, so I set about simply making it rideable. This was a feat in itself as I’d never attempted anything like it before, however, the internet is a wonderful thing and it wasn’t long before I had a basic single-speed bike that suited my purpose. All it took was a new back wheel, sprocket, bottom bracket, tubes, chain, chainring, saddle, brake cables, bar tape and a bell. Phew!

So that was two years and 1500 miles ago, during which, to my shame I did hardly any maintenance apart from replacing the brake pads and cleaning the chain every now and again. I decided it was time to sort it out properly.

Now, I could’ve paid someone to do the work, but where’s the fun in that? Plus it would cost serious cash to have the frame stripped and powder coated and, after doing the traditional internet research I was confident I could do just as good a job. It didn’t take long, however, before I started to regret my decision.

First job was to strip the frame of all components. Many of them were shot anyway – chainring, wheels, pedals, sprocket, brakes – all needed replacing, so I decided to pay for decent components rather than recycled items. Everything else had a good clean & polish to remove rust and grease. Frustratingly, despite my having the correct tool one of the cranks just refused to budge. I had no choice but to leave it attached and mask it during the respray. 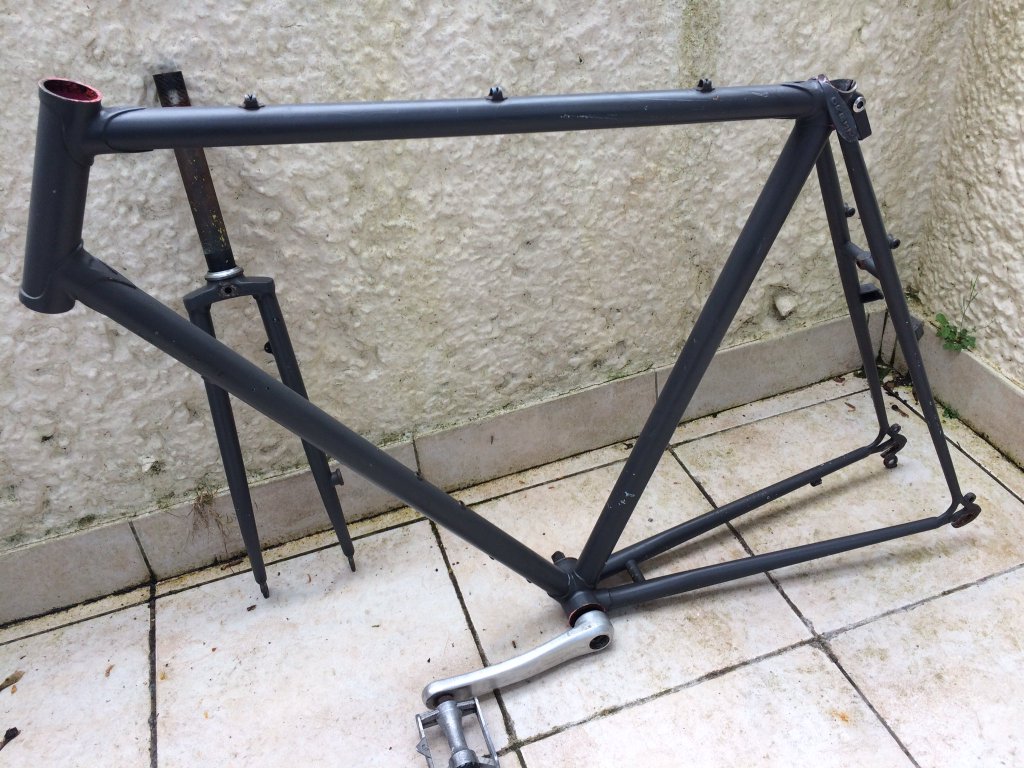 Then the hard part: sanding and smoothing the frame. My aim wasn’t to remove every inch of paint and leave bare metal, but to simply create a smooth, even surface on which to build up the new paint layers. Simple in theory, in practice it was very different.

Starting with coarse sandpaper I stripped back the grey topcoat down to what I think was the original 80’s blue and pink gaudy paintjob. This was particularly important around the joints of the tubing where the previous spray paint had pooled badly. It was also necessary to chase back scratches and blemishes until they disappeared and then move on to finer wet-and-dry paper to blend them with their surroundings. It took me two whole days of backbreaking work, along with broken nails, to reach a point at which I was happy with the feel of the frame. 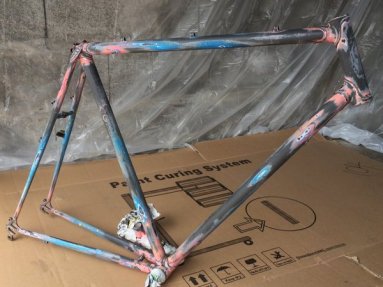 Once this was done it was time to get painting! You might think that this would be easy, but oh no…

After a trip to Halfords I had primer, paint, and lacquer all ready to go. Using tape & newspaper I masked all the important bits, suspended the frame in a well-ventilated garage belonging to my girlfriend’s mother (I made sure to ask permission), the contents of which I covered with a large tarpaulin.

Using long sweeping strokes (as recommended by all the online tutorials) I soon had the first coat of primer applied. Thinking it was suspiciously easier than expected, I hadn’t even done half of the second coat before the can was empty, which was surprising as there should have been plenty of paint to do at least two coats.
I concluded that I had been a slightly over-cautious with the ventilation in the garage, opening both the door and windows and causing a mini wind-tunnel effect that had dispersed a lot of the spray from the can.

Grumbling a bit at having to purchase another can of primer I closed the windows and lowered the door a bit, which seemed to solve the wind problem. With the rest of the second coat soon dry I could move on to the colour top coat.

I chose a metallic British Racing Green as I love the colour, and I reckoned it’s easy to get hold of if I ever need to do any touching up in the future.

The really tricky part was that, unlike with the primer, it was really important the colour be applied evenly. It was a fine line between applying too little (you could still see the primer) and too much (the paint will run). In the end I figured that any dodgy bits could be covered during the lacquering, and the glossy finish would enhance the whole thing.

Before the lacquer, however, came the small job of applying the decals. These I had found online, where I managed to obtain the quite rare original Orbit frame logos. To finish it off I also ordered some Reynolds 531 fork and frame transfers, which would lend the frame some authenticity.

I agonized for far too long over positioning, measuring the placement to the millimeter, but it was definitely worth it in the end. I couldn’t have lived with having to look at wonky logos every day!

Once the decals were in place it was time for the lacquer. This was necessary, as metallic paint doesn’t have a gloss finish –something else I found out during my research.

Ironically, the lacquer was the hardest part of the job as, although transparent, if not applied heavily enough it didn’t have the proper glossy shine but applied too heavily and it would run. It was probably a bit pedantic but I was determined to have as good a finish as possible!

Something else that I didn’t realise was that in order to harden properly, and prevent chipping, the lacquer had to be left to dry for two weeks. Two weeks! This did however give me time to assemble all the other components, order new ones, and clean and polish any bits I was keeping. It’s amazing how a bit of care and attention can make old components look brand new.

Finally the two weeks were up and, after removing the masking tape and fitting the forks and headset together, the bike really started to look like a bike again. I didn’t want to rush things but was excited by how good it already looked. I spent the rest of the day meticulously assembling the bike, using plenty of copper grease on any screws and threads to make it easy to remove and replace components in the future. A final touch was to coat all the exposed metal with ACF-50 – an anti-corrosion spray that will protect from rust and dirt, Also, as a concession to the weather and to prepare for the winter, a new set of Gatorskins (Evans Cycles) and SKS Chromoplastic mudguards (Wiggle) finished the job.

The project took longer than I’d planned; it was more challenging; and mainly due to a steep learning curve, cost a little more than expected. However, the end result was definitely worth it.

The frame isn’t painted perfectly but I honestly don’t think I could’ve done a better job, and it certainly passes anything but close scrutiny.

I’m glad I made the effort, but having done it once I think next time I’ll pay for powder coating!

2 thoughts on “Guest Post: A Bike Restoration Adventure –by @DrewMabey”