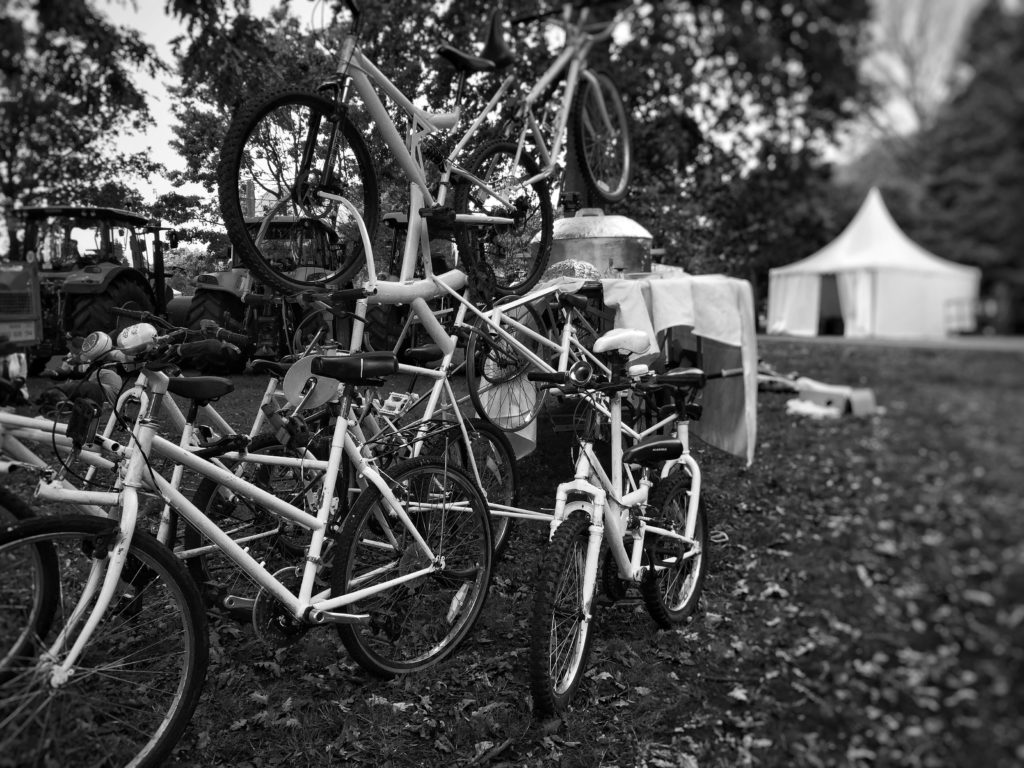 We couldn’t let such a momentous event pass without saying something about the amazing Roald Dahl celebrations of 17th and 18th September, particularly as there is a bike-related story to tell, not to mention an active travel planning lesson to be learned.

We weren’t sure quite how to play this. It could have been turned into a number of shorter posts, but perhaps on balance it would be cathartic to just unload from the very beginning. We were also unsure where to place it. It’s not so much an epic ride, but an epic bike and an epic experience. Maybe we need a new category? Anyway…

A few weeks ago our good friend David responded to a request for cyclists to get involved in the City of the Unexpected. Quite how cyclists would be involved was unclear at the time, but David was up for it and invited a few of us along as well.

Oh boy, what had we got ourselves in for? As it turned out, the role of piloting a huge articulated banquet table around the centre of Cardiff for two days in September. At this point we were sworn to secrecy –it’s ‘unexpected’ remember. However, we did let something leak as a means to get a few more people interested.

A very clever man with a welding tool had cobbled together a terrifying contraption from a number of old, unwanted bicycles –mostly supermarket mountain bikes that had seen better days. It really did look terrifying, but the welding was sound.

Attached to that would be a long banquet table, made up of four sections and with three turrets made to look like cooking pots that would house our three performers. Finally at the back, a tail-piece made up of a few more bikes that would hold a couple more riders.

We had a few short training sessions on the bike in the run up to this weekend, mainly to give some new recruits a chance to try it out and to see if they wanted to take part that weekend. There was also a few sessions with the entire rig, where we would navigate around a car park, measure turning circles and test how forgiving the contraption would be. Some of this involved brief excursions onto the grass, which was…let’s just say a little challenging…

It wasn’t until a fortnight ago that it became clear exactly what we would be doing –we would be sous chefs and with that, aside from the pedalling there would also be a small acting role for us as well. For some of us, drama lessons were a distant memory. Second thoughts were had, bowels were loosened but we made it through.

After a two-hour rehearsal for our acting debut, we had a rough idea of what we were doing.

The first day of the City of the Unexpected was insane. It was a beautiful, sunny day and people descended upon the centre of Cardiff in their tens of thousands, with the majority congregating around Castle Street and Westgate Street. It was spectacular, although admittedly uncomfortable for some.

We were dressed in full chef’s whites, neckerchiefs, gloves and hats and it was absolutely sweltering. Still, our time outdoors was kept mercifully short, the bottled water plentiful and breaks between performances quite long, so we can’t complain too much.

Our route had changed a few times over the course of a few hours, mainly because the sheer number of people who had amassed on the streets adjoining our Cardiff Arms Park base was unprecedented.

Our route was initially to ride to the end of Queen Street, perform there and return. However, our chances of getting anywhere near Queen Street were remote, so our route was curtailed to halfway down Castle Street. We would perform three times outside the castle that day, each time our performances got a little better and the nerves continued to melt away.

We had sustained a few technical faults between performances, but fortunately Daniel from Gweithdy was on hand to provide support. Wheels had been a bit of a problem in rehearsals, not so much from the weight of the contraption, but the force of pivoting around with a huge table attached. We made a mess of a couple of wheels discovering just how sharply we could turn (unsurprisingly, not very!).

One thing had become rather apparent though –this machine really was heavy! We’ve tackled some big hills in recent months on our road bikes, but the amount of force needed to get this thing up any sort of incline was something else. By the end of the day the legs were tired but the heart happy.

The great big bike was involved in the wedding procession at the end of Saturday’s festivities and had unsurprisingly sustained a few buckled wheels. We’d had a call to say Sunday was off, but mercifully the machine could be fixed (plenty of spare wheels around) and another day of fun lay ahead.

Sunday was based entirely within the confines of Bute Park, which actually made for a much better experience overall. There was a stage at the centre of the park, providing a focal point for everyone and a place for families to set up for their Pyjama Picnic.

Having everyone at the centre of the park also meant that we were able to use the path around the edge of the park without too much of a problem, making us much more visible than we had been on Saturday. We clocked 2Km around the park before pulling over for a performance at the Education Centre (yes, it did go on Strava…).

It was here that the BBC caught up with us, looking for footage and some admittedly unrehearsed words from us for the highlights show. It may or may not be embarrassing, but it’ll be fun if we do end up in the show! They hung around for the performance and even had a bit of a dance with the kids.

We did far more mileage on Sunday, but only one performance –that’s a much better balance! However, when that last performance came to a close, I couldn’t help but feel rather sad that it was all over. It was actually good fun being at the centre of it all, if only briefly. Much of the afternoon was spent posing for photos with the children, answering questions and soaking up the amazing, chilled-out atmosphere in the park. It left me wanting more and also wondering what else I could get involved in that could give me that same buzz again. I’m never going to be an actor though…

Events like this don’t happen every day in Cardiff. Not even international rugby match days at the stadium come close to crowds of that magnitude. Not everyone was happy about that, particularly given the deliberately unpredictable order of proceedings. Many of the commenters on the Facebook page for the event are disparaging, but turnout was probably higher than most people had anticipated, leading to some obvious logistical challenges.

Not only was it a fantastic spectacle and an event that will live long in our memories, it was also a fine example of what you can do with a few closed roads and a city full of families out to have fun.

Keeping in mind that Arriva can barely cope with our morning & evening commuters; a number of roads were closed; and thousands of people needed to get into and out of Cardiff, cycling into town seems like the obvious solution.

I travel in to town most days from the Taffs Well area. It takes around 25-30 minutes on the Taff Trail and this is ALWAYS the case. Whatever happens on the M4, or any of Cardiff’s major or minor roads, there’s seldom anything to hold you up, save for the occasional fallen tree…

Unsurprisingly, with tens of thousands of people in Cardiff, my journey time was still unaffected.

You would think so, but once again no additional bicycle parking had been provided, meaning that on the Sunday, bikes had to be chained to temporary railings surrounding the BBC Radio tent.

On the Saturday we were fortunate to be able to store our bikes in the tunnel behind the stands at the Arms Park, but curiously there’s not a lot (if any) bike parking on site there either.

Now, we know we should expect nothing less. Bike parking is often found wanting where large events are concerned. We went to great lengths to talk about it before. However, with an event of this magnitude, you have to wonder if bike parking is even on the council’s radar? It can be shipped in; it doesn’t take up a lot of room and it can potentially keep an awful lot of cars off the road and people off the public transport network.

There were a lot of us out there this weekend, but you can count the number of racks in Bute Park on one hand.

One thought on “Roald Dahl's City of the Unexpected…”