In our previous post we talked about the Council’s strategy for delivering improvements to its cycle network. As part of that strategy there are two new “primary routes” to talk about, one travelling east to west and the other north to south.

There are also longer-term improvements planned to the original Enfys routes, but we’ll get to those in future posts. In this post we’re going to go straight to the most interesting and ambitious project of all –the east-west primary route. 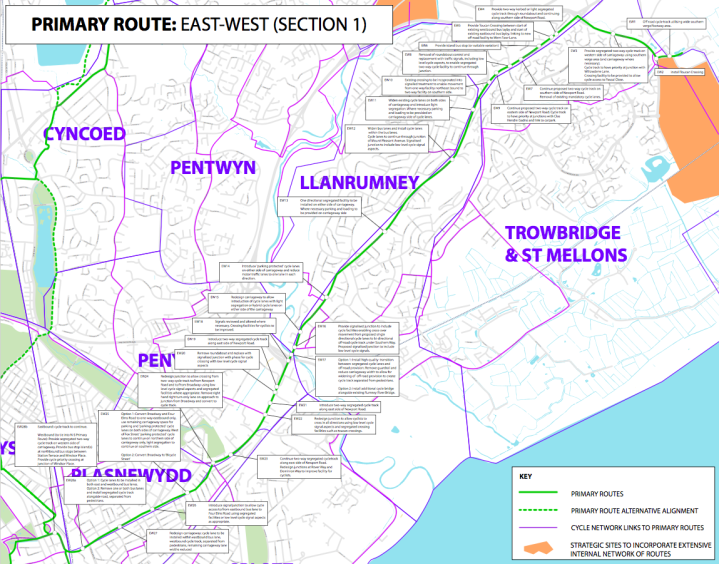 Linking the city centre with the new proposed development at the eastern edge of Cardiff, much of this section concerns Newport Road from where it meets Queen Street, Dumfries Place and Station Terrace, all the way to Cypress Drive in St Mellons.

Let’s address this straight off the bat. If you look very carefully, Queen Street has a big purple line through it on this map and it does appear that the council plans to allow cycling on Queen Street. It’ll be nice to finally put this issue to bed once and for all.

Heading east from Queen Street, the council appears to have two options on the table for a number of sections along this road. One option for the section west of Fitzalan Place is to install cycle lanes within both east and westbound bus lanes –which sounds distinctly dodgy; or it will remove one or both bus lanes and install a segregated cycle track alongside the road, separated from pedestrians. That sounds more like it.

However, further up beyond Glossop Road (EW26) the plan is to install a cycle lane within the eastbound bus lane and install a cycle track on the westbound carriageway. That should answer the question of what it plans to do in that first section (EW28a) –it should be the same. It shouldn’t look like it was planned in a piecemeal fashion, even if it was to be installed that way.

At Clifton Street the route splits from Newport Road to head down Broadway, where it will either be converted into a one-way street with a parking-protected bike lane (cynically known as a door-zone cycle lane with no room to swerve out of the way…); or it’ll be converted to a ‘Bicycle Street’.

Where it rejoins Newport Road they are planning a two-way segregated cycle way along the east side, as well as a redesigned junction at TGI Friday to make it slightly less hateful to access Rover Way.

The roundabout at Currys is also for the chop, to be replaced by traffic lights with phasing for cycle crossing. On the subject of roundabouts, there’s more good news as they plan to either provide a “high quality transition” between the segregated cycle lanes and off-road provision, or even install an additional cycle bridge across the Rumney river.

The remaining section through Llanrumney is a mixture of light segregation and signal upgrades until Cypress Drive, where there will be a two-way segregated cycle track.

Whilst Queen Street is on the map as a cycle route here, it isn’t the primary route. It actually takes you around Stuttgarter Strasse where three options are being considered:

The route then heads past the Hilton, onto the Kingsway and along Castle Street. There’s a two-way segregated track planned for this part. Good!

After crossing the Taff, a junction redesign is planned to allow you to turn right, up the Taff Trail to Sophia Gardens where you’ll follow the road to the stables and the A48. However, they plan to remove the speed bumps, mercifully. Some lighting would be good here too, but it isn’t mentioned…

At the end of the road, there’s a left past the WJEC where an upgraded crossing will be waiting. The currently narrow path on the other side will be upgraded and separation from pedestrians provided. Then, up the steep hill by the Cathedral, take a right along Bridge Street and a set of lights will be waiting. Currently you have to wait for a safe gap to pull out if you are turning right, which isn’t a lot of fun and can take an age when it’s busy, so that’s good. There will also be signals where the roundabout is now, taking much of the guesswork out of the equation.

On Llantrisant Road there are three options planned.

None of these options are ideal, given the width of this road (seriously, it’s huge), but on balance, perhaps option 1. 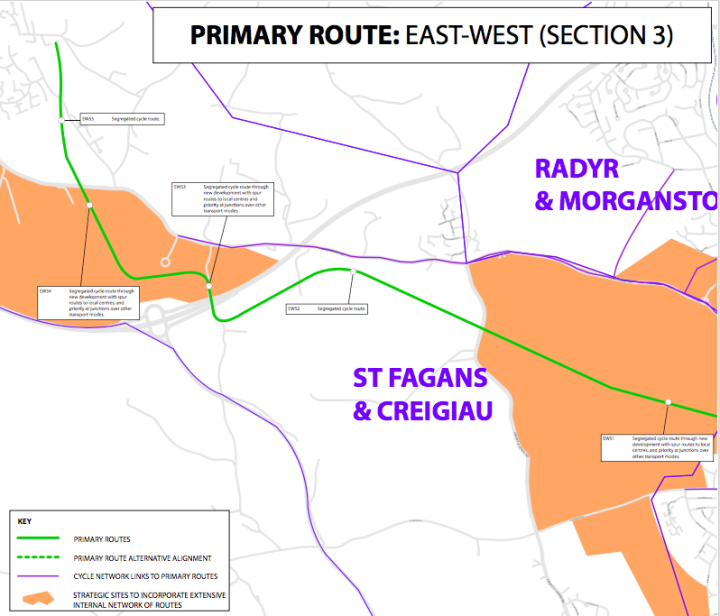 At the roundabout you leave Llantrisant Road and head onto what looks like an old railway line that snakes through the two proposed developments all the way to Creigiau. This is something we’re quite excited about –it’s segregated all the way and oh so straight, as old railway lines are.

Apart from the options presented for Llantrisant Road, which are a bit disappointing, there’s a lot to like here. We’re particularly excited by the upgrade of the old railway line to Creigiau.

Having a two-way track past the castle will also be very helpful. However, implementation is going to be interesting. It’s going to be like one of those puzzles that look like very little until the last piece is in place. Even so, they’ve set a 2020 finish for this, so it’s not too long to wait in the grand scheme of things.

However, we’d love to know what you think about this east-west route. Let us know in the comments. Would you make any changes to it, because you know, there’s still time…