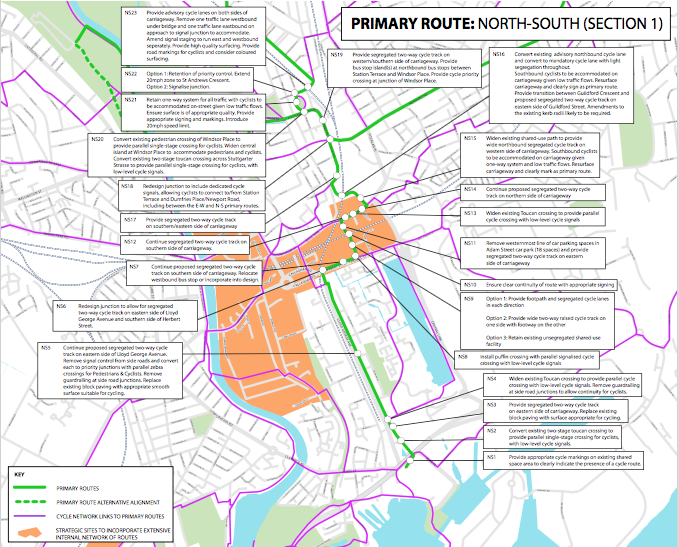 Continuing our series of deep dives into the Cardiff Cycling Strategy and integrated network maps it’s time to look at the second primary route on the table – the north to south route.

This route links Cardiff Bay with the proposed new development between Lisvane and Pontprennau. As we talked about in our look into Cardiff’s Local Development Plan, the new homes at Lisvane will dump traffic onto Caerphilly Road and most likely the A48, so an active travel alternative is crucial here. So, let’s see what is in store for us.

Starting in Cardiff Bay by the Millennium Centre, the route jumps straight onto Lloyd George Avenue –more specifically the infrastructure that is already there. However, before you say it, there are some changes planned.

A two way track with a new surface between the Millennium Centre and Hemmingway Road is coming, as is a parallel cycle crossing at Hemmingway Road. After that, we’re onto the path that usually has vans parked on it. Mercifully, the council plans to remove the signal controls here and put cycle priority in (so the cars give way to you, at last).

At the end of Lloyd George Avenue where it joins Herbert Street, there will a two-way cycle path leading to a new puffin crossing to access the “magic bridge” to Pellet Street.

A row of parking spaces on the Adam Street car park are for the chop to make way for…yes, you guessed it, a two-way cycle lane leading you to Sandon Street. From here you’ll eventually end up on Station Terrace where another two-way cycle lane will take you past Queen Street Station to the junction with Dumfries Place.

The junction will be redesigned here to provide dedicated cycle signals. Incidentally, this is where the two primary routes meet, so you can choose to head east, west or continue north.

From Dumfries Place you take a right onto St Andrews Crescent and then St Andrews Place where you’ll find some advisory cycle lanes (some road space is being reclaimed for that) taking you onto Senghennydd Road.

At the end of Sengennydd Road a new crossing will be waiting to take you onto Cathays Terrace where we find our first set of choices.

We don’t particularly like either of those. You can widen the lanes all you want, we’re still going to have cars encroaching on our personal space. If the hybrid lanes follow the Brighton & Hove example, they may be ok providing they aren’t used for parking –extended loading and unloading, you could say.

At the top of Cathays Terrace we cyclists will get an early start at the lights. Now, here is where there are two routes being considered. One takes you down Allensbank Road, the other straight across to Fairoak Road and the park. The park route hasn’t been fleshed out and we’d question how they plan to get us around that roundabout safely, as the dashed line takes us onto Lake Road East.

So, the front-runner appears to be the Allensbank Road route. From the top of Cathays Terrace it’s a left onto Whitchurch Road by way of more hybrid cycle lanes (makes sense for the council to take option 2 on Cathays Terrace after all…). When you get to Allensbank Road there’s another two-way lane with light segregation planned.

At the traffic lights the route veers off left towards the hospital, taking before taking King George V Drive up to Heath Halt Road. There are more choices to be made here.

Slim pickings here. All things considered it depends how they plan to ‘improve continuity’ or how long they plan to have us wait at the lights.

From Heath Halt Road it’s onto Lake Road North. Here the centre line will be removed and humps added. Hmm…ok then. Things get a little interesting at the bottom of Lake Road North though. Taking a left onto Llandennis Road, instead of taking us up to that horrid roundabout at the bottom of Fidlas Road, they’re going to upgrade the path through the Nant Fawr woods, light it and separate us from pedestrians. Sounds good.

Much of Rhyd-y-Penau Road will lack a centre line and have big “cycle” logos at either side. This can be quite a busy road, especially during school run times, so we have some trepidation about this. It’s also a very wide road towards the top of it. Plenty of room for a two-way cycle lane.

Compared to the east-west route the north-south route is a bit more of a hotch-potch of compromises. Of course, much of the north south route is on smaller roads that don’t offer as much road space for re-allocation.

There are few things more annoying than having to transition to another road or piece of infrastructure because it ruins momentum and wastes time –especially where these transitions are signalised or crossings of any sort.  Sadly there appears to be more of those transitions on this route.

However, there’s another route marked in purple that is currently signposted as a university route, linking Senghennydd Road with Ty Gwyn Road by way of Lowther Road and Arran Place. As hills go, Ty Gwyn Road is no worse than Rhyd-y-Penau Road and you spend more of your time on Cyncoed Road. That is probably the route we would take out of choice.

So, a mixed bag so far. In the next update we’ll look at some of the longer-term upgrades, or the purple routes. Until then, what do you think about the north-south route? Let us know in the comments.