This weekend Bristol once again played host to the Bespoked Handmade Bicycle Show. It’s a showcase of two-wheeled ingenuity from independent frame builders from all over the world.

Whilst you can buy bicycles from your local bike shop, chances are it’ll be the same bike that many others in the area will be riding. A handmade one, on the other hand, can be built to your exact measurements and specifications. 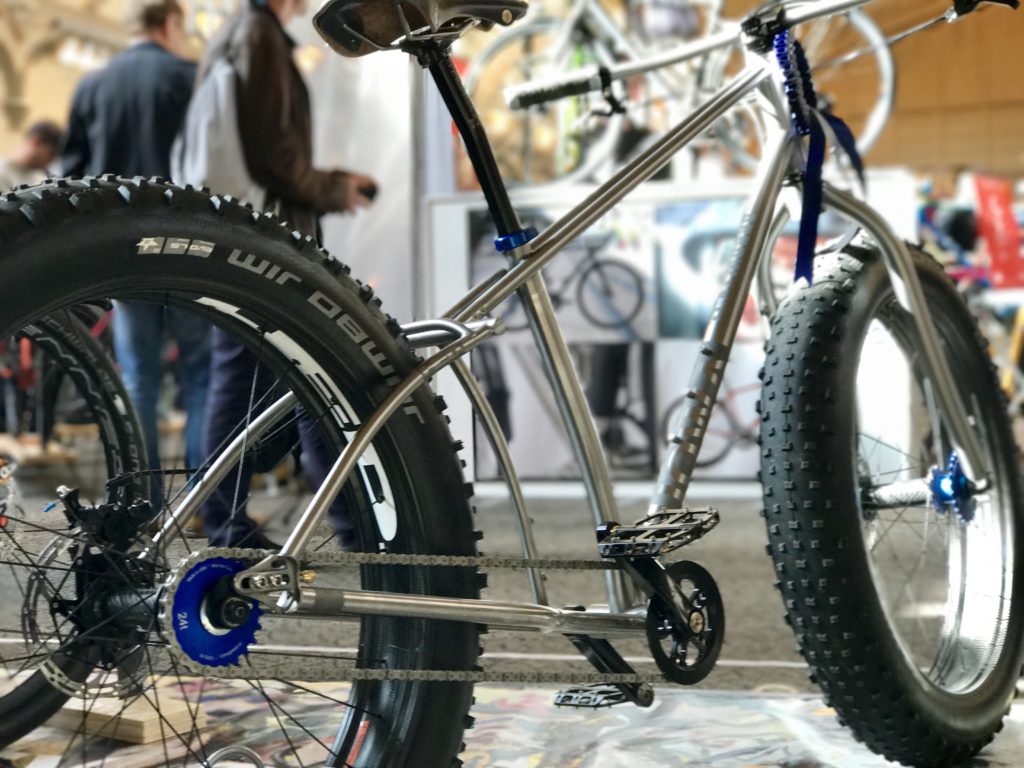 Having a bike built to fit you offers a number of advantages. Not only will it have more chance of fitting you perfectly –particularly useful if you are either end of the height scale, but you have the chance to fit it with whatever components or details you desire.

Of course, you generally need a fair amount of money to burn to get that perfect bike, but it’ll be yours and arguably a lifetime investment providing it doesn’t get stolen, obviously.

However, this post isn’t really about trying to get you to dump £5,000 on a bespoke, hand-built bicycle. Instead we’re going to talk more about where the world seems to be going right now and the opportunities the handmade market presents to us, not just in terms of bikes but in the ecosystem that surrounds them.

With the UK cutting ties with its largest trading partner, the EU; the USA electing an isolationist president and with nationalist movements appearing to rise up around the world it’s probably fair to say that a growing number of people aren’t happy with the way things are now and have started looking inwards.  The appeal of getting goods made cheaply on the other side of the world seems to be slowly losing its appeal, particularly as outsourcing and automation are making a lot of people redundant.

Ultimately, it’s the businesses and their staff closer to home that often lose out when consumers can shop from a global market and can obtain goods and services far cheaper than can provided locally. However, the handmade market gives people with the right skills an opportunity to spot gaps in any given marketplace and either weld or stitch together a product that fills that gap.

Generally speaking, the larger the business, the slower it is to change direction and the less willing it is to upset its shareholders.

So, small-scale enterprises provide an opportunity to take risks, or add an extra level of creativity that you wouldn’t normally find on an off-the-peg bike or accessory from a larger company.

Yes, you may end up paying more as the consumer because the economies of scale just aren’t there, but you’ll probably get a more interesting and more thoughtful product.

One of the surprises from Bespoked, as a first-timer to these shows, is that it wasn’t all steel bikes. Yes, there were a fair few steel frames there, but also a healthy supply of carbon and titanium too. There was also a couple of wooden bikes on show.

There were also hand-made cargo-bikes and fat bikes in amongst a strong showing of hand-built road and mountain bikes, not to mention a large presence from Brooks and the pre-eminent tube manufacturers Reynolds and Columbus. Moulton were also there with a rather impressive Di2-equipped offering.

It wasn’t all bikes though. Boneshaker magazine was there, whose focus on cycling stories instead of thinly-veiled ads was refreshing. We’ve also become big fans of Restrap, whose excellent bike-packing gear was on show at various stands around the hall. There were also clothing makers, up-cycled wallets and belts made from old tyres and inner tubes and even a company with a unique saddle-fitting service that measures the pressure points on your backside to find the right position for optimum comfort.

Our friends at Odoni were also in attendance, providing the sort of temporary bike parking we’ve started to see outside the Hilton in Cardiff.

With a steelworks in South Wales, albeit occasionally, one thing that did surprise us was a lack of local frame-builders. We’ve only been able to find one, the Swansea-based Paulus Quiros, who actually delivered a talk at the event.

More generally, Cardiff has a burgeoning market in the creative space. A number of non-profits and pop-ups have appeared just outside the city centre, with the Boneyard and Printhaus being the first that come to mind. We’ve talked about Cardiff Cycle Workshop a number of times now, but there is also Punk Bikes and Gweithdy plying their trade in the bike restoration and customisation business. We also have Pura Velo here in Cardiff, building custom wheels.

Cycling is such an all-consuming activity that there are avenues to exploit left right and centre. People need bikes, yes, but they also need clothing, accessories, coaching, bike-fitting, dietary advice, bike-themed homeware, bike storage, cycling-inspired stories. You name it we’ll need it, or we’ll have a really good go at providing a justification for needing it. We’re good like that…

A call to action…

If you know someone based in or around Cardiff or the wider South Wales region who builds bikes; upcycles old inner tubes & tyres; makes cycling clothing; writes about cycling; hand-makes accessories; or makes anything we might not have thought of, please let us know. We’ll compile a list and create a directory on here.

2 thoughts on “Bespoked 2017 and the appeal of handmade…”