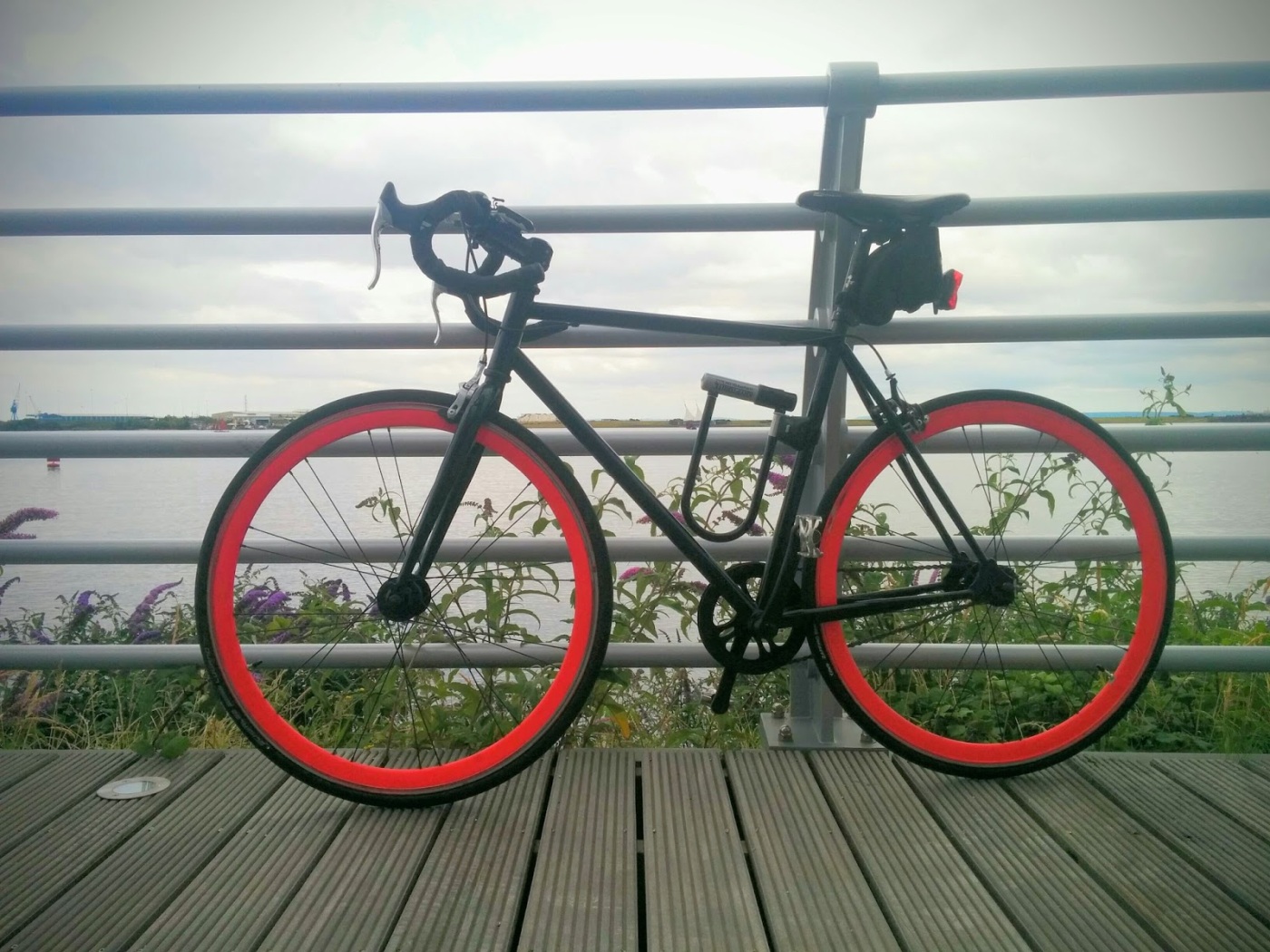 Before we dive in, I’d like to set the scene to where I was a couple of years ago and how I came to fall in love with riding and roaming around Cardiff By Bike – see what I did there? 😉

A few years ago I was returning to riding after nearly a decade off bikes, for various reasons and rediscovering why I spent so much of my childhood on two wheels. I’d been riding a road bike for little over a year for both the odd adventure up a hill to get fitter and my daily commute of a couple of miles. However, the realisation was setting in that really I needed a separate bike for commuting on.

Maintaining a “one bike does it all” was taking its toll on my entry-level road bike, but getting a hybrid didn’t really appeal to me and I fancied something different to the mountain bikes I’d spent my childhood on. Talking to a colleague and friend one afternoon he said “I’ve got a singlespeed I’m not using, if you fancy borrowing/buying it?”. I thought “Aye, go on ‘en. I’ve not tried riding fixed before!” A quick Google seemed to confirm my assumption that the lack of a front & rear derailleur and corresponding cables meant less maintenance: the perfect winter/commuter bike I thought.

Forewarned by my buddy that the bike needed a bit of tender loving care I started reading and watching videos on basic bike maintenance and started a building ideas in my head about not just how I could improve the bike’s ride but also customise it and “make it mine”. The bike has a flip/flop hub, a freewheel on one side, a fixed gear on the other, so I could pick & choose between riding singlespeed or fixed. It didn’t take long too long to get used to riding fixed and after a few days commuting a short distance into work I was pretty comfortable with it. I even started track standing at the traffic lights!

After a few months commuting in this configuration I’d started to get an idea of just where that aforementioned TLC needed to be spent. The brakes worked, but they weren’t great. I replaced the pads, rear caliper and cables in one go and that made a world of difference and was well within my abilities, even for my lowly mechanical ‘skillz’. The wheels turned but didn’t really feel free when they did so. After watching GCN’s Maintenance Monday videos for a while I felt like having a go at re-greasing the wheel hub bearings. A few dirty finger tips later and I’d managed that without losing any ball bearings. The next morning’s ride was a lot more fluent and took less effort to turn the cranks. Success!

With the weather getting better into spring I also decided to replace the worn bar tape with something more colourful. “Why not match that lovely red on the wheels?” I thought. I went for Fizik Microtex stuff as it’s basically weatherproof, but I’ve heard Lizardskin’s bar tape is very similar too.

I still had more to do though. I often found myself going to the shops to pick a few odds & ends up on the way home and whilst most of the time I could wiggle packages and boxes into my work bag it was rarely comfortable and left me longing for a better way of getting things from A to B. I knew cargo bikes existed but in no way could I justify the price; trailers looked fiddly to me; and panniers to me were just another awkward bag to struggle with.

I did a bit of research and eventually discovered a French word: porteur, which can be an adjective describing the act of carrying or a noun meaning “the one who carries”. I found this word on an interesting blog post, The Porteurs of Paris, and in a simplified summary these were bike lovers who raced their machines delivering the news hot from the presses straight to newsstands all over Paris. They did it like this: 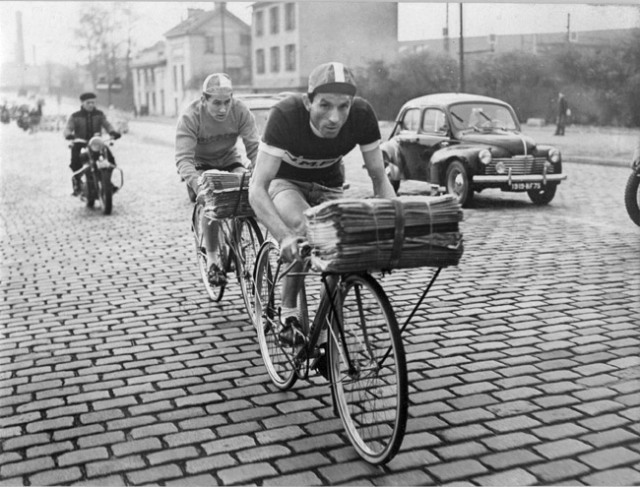 Many porteurs were amateur or semi-professional racers who used their jobs for training, so it was natural to organize a race of the porteurs every year. The course started in the newspaper quarter of Paris, went around the Boulevards Extérieurs before climbing the hill of Montmartre. Riders had to carry 15 kg (33 lb) of newspapers. At the half-way point, they had to exchange their load for another pack of newspapers. Much of the course went over cobblestones, and not all were as smooth as the ones in the photo above.

Source: The Porteurs of Paris | Off The Beaten Path

I saw these images and I loved them. I loved the raw simplicity and perfect mix of form and function. The riders can get aero, ride fast, and get rewarded for delivering the news fast by bike. There are more details of how these porteurs did their jobs, and races, in the post linked to above and I definitely recommend checking it out.

So I started looking for a porteur bike rack. Turns out this was quite hard! This niche doesn’t have many options and those I did find were either extortionate hipster-level expensive or looked flimsy enough to fold under load. Eventually I found a company called Basil who make exactly what I was looking for in two options: with and without “borders”. With borders means it comes with walls, like a basket and without is, er, without ‘em.

I’d spent some time searching for and ogling at old porteur bikes online and saw that many were small wooden crates to them so I picked a few up from a local home store, spray painted them red (I really like the colour red by the way) and grabbed some bungee cord. Lush. I had exactly what I needed. With two big red crates and tidy size flat porteur rack on the front I could use whichever box suited my needs on any given day. I started doing my weekly shop by bike and found I could get about a 1 and a half basket’s load in without too much effort.

I’m not the only one who has adopted this idea however. On Wood Street recently I saw a nice retro looking old steel frame bike with a porteur rack and old wooden crate on the front. A few days later I saw it again on Queen street. Whomever you are, my fellow porteur: chapeau!

I still found on the odd occasion where I was shopping for a trolley load of things, or where I picked up packages from the sorting office of awkward sizes, that I could do better. Still being pannier-averse I looked at other options for mounting something to the back of the bike. I found Topeak make a seatpost mounted flat rack would extend over the rear wheel and hold a reasonable load. So I ordered one and it does exactly as it says on the tin. The bonus is that has a mount for a rear light and rubber straps for helping mount things to it. Perfect!

I now do 99% of my shopping like this. I pop the smaller crate on the front rack with the larger one on the rear seatpost mounted rack and ride down the Taff Trail to the shops and home again. A couple of more recent additions are some clip on/off mudguards and a more comfortable saddle. I can even now say that I actually look forward going food shopping! I get a few quizzical looks when people see me riding in full utilitarian setup but most people smile and admire the continental approach to transport. The nice thing is that I can scale things up or down depending on my needs on any particular day. When commuting I ride with the front rack on, but no crates, and keep some straps with me just in case I do end up grabbing something I need to attach to the front.

The other morning I was passed on Llandaff Bridge by a roadie on a flash carbon frame and deep section wheels who commented “Nice bike mate, good way to get about!”

2 thoughts on “Guest Post! From unloved fixie to pretty & practical porteur –by @bendihossan”