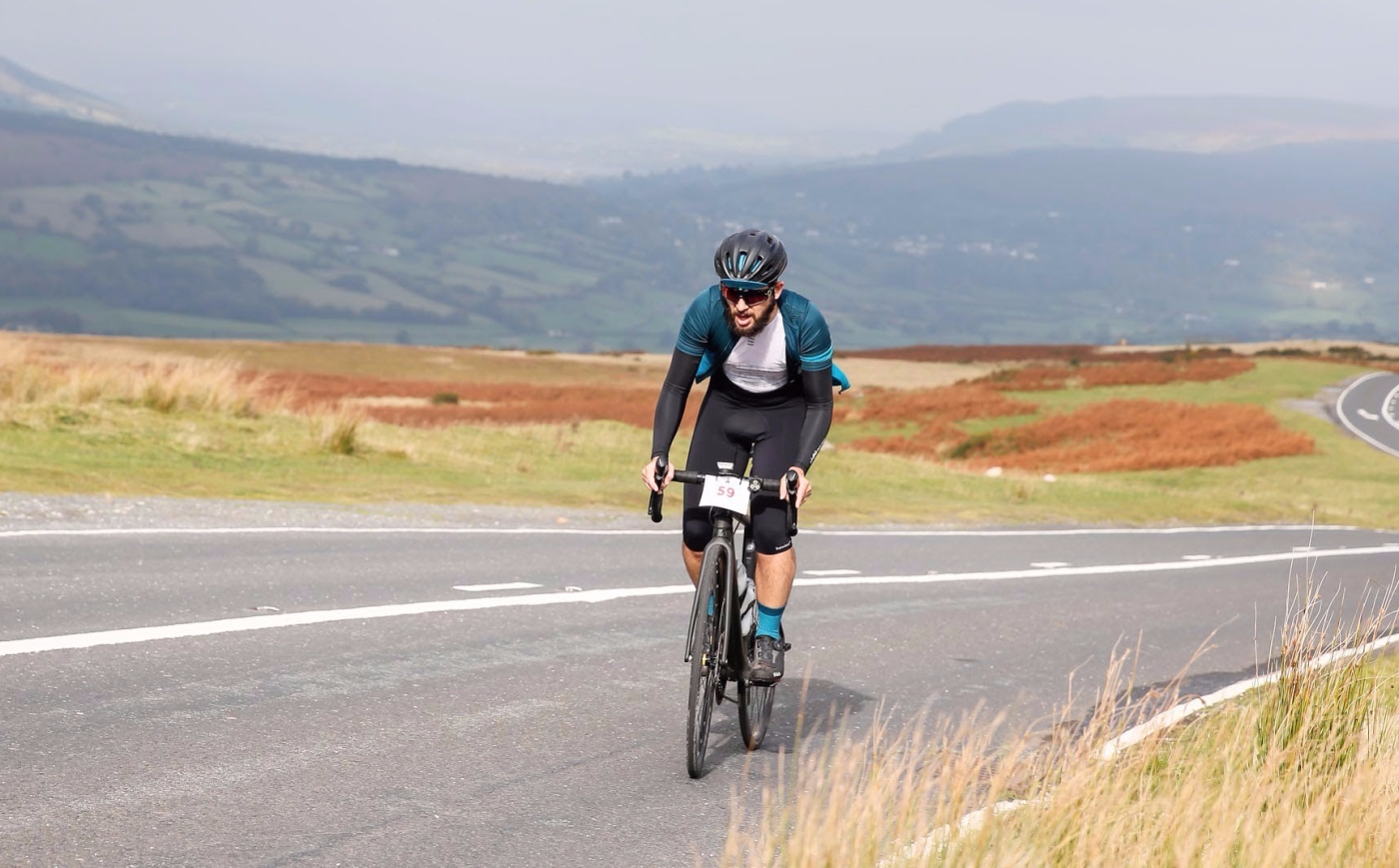 I like to putting myself through some pain on the bike. I enjoy hill climbs.

I’m not going to pretend I’m the best at it, far from it, but I enjoy a good 20 to 30 minute climb up a mountain where there’s a view to be had. But that’s not just what I’m writing about today.

Last winter I was looking for potential sportives to take part in for the following spring or summer. I’d ridden Velothon Wales a couple of times and done a couple of Wiggle sportives via UKCE but I was looking for something new. That’s when I noticed the Castles And Cathedrals Sportive for Shelter Cymru. It’s a smidge longer than the Velothon at 150km and has about 600m more climbing to do in the form of a lumpy route through the Brecon Beacons. That tickled my fancy so I made a mental note to take part in 2017.

One issue: it’s in October. Hmm, weather might be an issue. So I left it at that and figured I’d wait and see what the weather would do before signing up.

It’s early October and the weather had been reasonably mild given the time of year. Only a few more days before sign-up for Castles & Cathedrals closes and I’m at a friend’s wedding in the Gower. Uh-oh. I felt a bit groggy the following day but this was no hang over. This was illness. This was a cold. This was… man flu.

It’s now October 10th, just 5 days before the sportive. I sign up anyway and committed myself to defeating the cold. I stayed indoors, worked from home, drank the remedies I could, and did my level best to shift it.

Saturday evening arrives and after giving my bike a once over I think “Screw it, whatever happens tomorrow. I’m riding. Even if it means diverting from the Grande route and doing the shorter Meidio, or Piccolo routes. I’m riding.”

I wake up the following morning bright and early and get into a set of clothes I know to be warm and flexible for whatever the weather decides to do:

At this point it’d been almost two weeks since I’d ridden a bike in any spirited fashion so I was a tad nervous about how I’d fair given I’d done no training and was coming off the back of a cold. 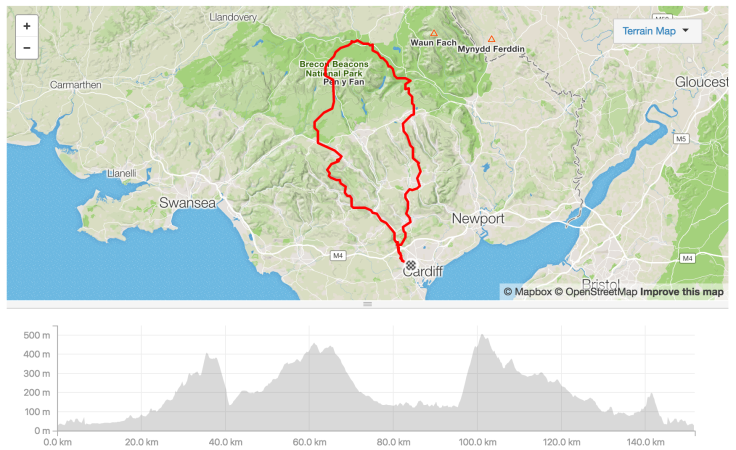 Arriving at Cathedral School in Llandaff with plenty of time to get through registration and pin my number on I started feeling happy to be back on a bike and probably got a bit over-confident. After a quick hello and chat with the guys from Plan2Ride I moved myself over to the start line and plonked myself right at the front. We were released in waves of 30 and I was front and centre, raring to go. When our group set off I already knew I wasn’t going to be sticking with these men and women for the rest of the day.

There were at least half a dozen wearing club jerseys and even those that weren’t had calves bigger than my torso. I thought that I’d stay in the bunch with them for as long as I could and when the moment arrives to drop off the back, the moment arrives and I ride my own ride at my own pace. The group was a good friendly bunch and I enjoyed a short conversation with a one or two.

Sure enough as the gradient start to pitch up shortly before Ferndale and the climb for Maerdy Mountain I dropped off the back and set my own rhythm for the approaching mountain I knew was coming. I’d ridden Maerdy the year before but that was from the other side so although I sort of knew what was coming, I didn’t know it inside out. I took a look at my heart rate occasionally just to check I was riding at what I knew was a sustainable pace for me but at this point I was feeling good and enjoying the ride. I stopped briefly at the feed station in Aberdare just to grab a couple of Welsh Cakes and a handful of jelly babies before cracking on.

From here (Aberdare) to Storey Arms was relatively unknown territory to me. I’d driven it once before but not recently and I’d never ridden it. Once into the village of Penderyn and past the distillery it’s an 11km ride up and over the moor before descending past Pen y Fan and into Brecon.

The ride over the moor is bleak. It’s open, exposed, and largely barren save for the occasional grouping of trees, rocks, or sheep. It’s that sort of climb that never really pitches up to any extremely difficult gradient; it’s just a never-ending false flat where every brow you rise over or corner you round proves be a false summit and you realise there’s a fair bit more left to go. That’s where I started to suffer.

It’d been about two and a half hours since starting and I’d bonked. I’d run out of energy and despite following my usual regime of eating 1 energy bar an hour to hour and a half I had nothing left. I knew though that once I reached Storey Arms it was a nice long descent into Brecon to the next feed station though. Hmm, more Welsh Cakes. That’s all the motivation I needed yet it was still difficult to keep the pressure going through the pedals. My body definitely didn’t want to do this today.

Sure enough though, as I rounded the corner past Pen y Fan and descended into Brecon the sun started to shine and the pedal strokes started getting lighter.

Once I’d fuelled up on raw sugar in Brecon and got moving I felt good again, even taking off my gillet and tucking it up in my middle jersey pocket. The sun was out, the countryside was glowing, and the next climb was approaching. I’d been wanting to climb Llangynidr Mountain for a while however I just hadn’t got round to it. Well today was that day. After enjoying the scenery along the route there I decided though this wasn’t the moment to test myself on it and rode within myself for the bottom section. Boy am I glad I did.

Before cresting the false summit (I knew about this one though, thanks StreetView) the legs grew heavy again and the cool breeze I had at the bottom turned into a stiff headwind. After getting over the top I put my gillet back on and started to descend the mountain and make my way towards Ystrad Mynach where the next feed station would be…and more Welsh Cakes. That’s not before I saw one poor soul who’d had enough and decided to abandon the event by climbing into a support vehicle. Eeek.

After a while the legs grew really heavy and the energy bars in my back pocket weren’t helping again. It had been about 2 and a half hours since I’d had a break and eaten anything seriously sugary. Spotting a trend here. My body wasn’t holding energy well or was burning through it quicker than normal in my still slightly ill state. On top that as the ride had gone on I’d become aware that my breathing wasn’t quite right. They weren’t exactly shallow breaths but I definitely wasn’t breathing at 100% lung capacity. More like ~85%. So most of the time I could push through it and I’d be fine but occasionally I just wouldn’t be able to gulp deep enough to get oxygen to the muscles.

This wasn’t fun anymore. This just hurt. Not that “fun” sort of hurt where I’m dictating how hard to ride or decided to push for a personal best. Just a miserable why-can’t-I-have-a-mug-of-tea-and-a-cry uncontrollable ache. My legs were stiff, my chest aching, and my head was not in a good place. In the middle of nowhere between Tredegar and Blackwood I stopped for 5 minutes to take on some water and wrestle with my mental demons. Remembering a GCN video on “How To Think Yourself Faster” I gave myself a some strong words of encouragement, stretched out some of the lactic acid in my legs, and got back in the saddle.

Not giving up yet. 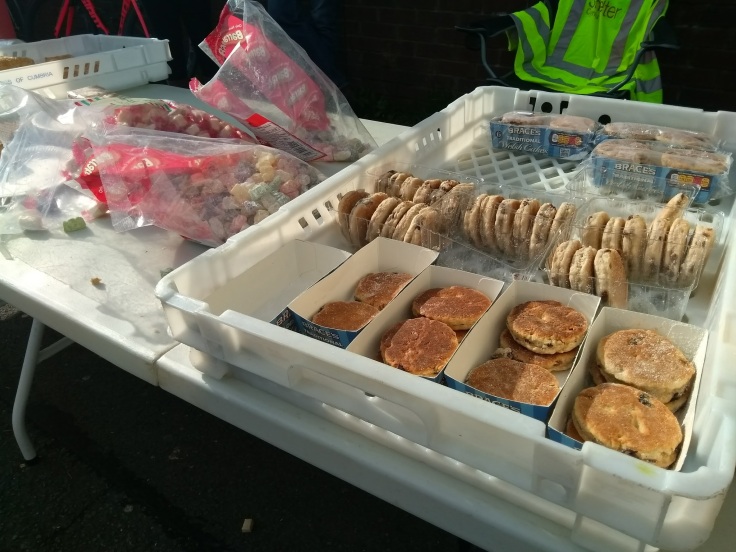 The feed station in Ystrad Mynach was a very welcome sight. More Welsh Cakes, more jelly babies, more sugar. Lush. I bumped into another rider and their friends who I’d chatted to earlier in the day at the bottom of Llangynidr Mountain and they were leaving the feed stop at the same time as me. I joined them from there back towards Caerphilly. Enjoying their company I tried to pull the odd turn on the front where I could and as we got on to more familiar roads there was just one more sizeable uphill section to go. A wee matter of Caerphilly Mountain. Thankfully not from the town road straight up to the snack bar at the top.

This was Blackbrook Hill which is a more forgiving climb that starts mid-way up the A469 and was one I knew well. Despite feeling absolutely knackered at this point I knew that even if I blew up again it wasn’t far to get home. After descending into Tongwynlais and heading through Radyr, Danescourt and finally Llandaff I was more than happy to collect my medal at the finish. I’d done it.

Nowhere near full fitness, nor health, I’d somehow got round 150km of lumpy terrain in mid-October.

Not every day is a good day on the bike. Sometimes your body just won’t cooperate, but that won’t stop your ride or the challenge being any less epic. No amount of willpower or morale boosts can save you then. It’s just about how deep you can suffer and for how long. For me “how long” on this ride was getting to the next source of high sugar content food stuffs.

When I’m in difficulty on the bike I enter a numb, quiet, sort of purgatory where the big picture disappears and your ride becomes a matter of rounding the next switchback, navigating the next roundabout, or just tapping out the next pedal stroke.

I think I learned a few things that day. Mostly: listen to your body. If the signs are telling you it’s not a good day to ride, it’s probably not a good day to ride. I learned that no matter how drained I get on the bike, I can completely blow up and given a 5 minute break and some sugar I can probably pick myself back up and keep going… perhaps even multiple times. Last Sunday’s ride had me in some serious lows but also some pretty good highs as well. During the lows I twice seriously considered abandoning. Yet during the highs I was laughing at how silly I’d been thinking of abandoning earlier.

I’ll contradict myself now though and say that if you set yourself realistic expectations, even when not at your best, you can still enjoy a serious ride. In hindsight perhaps I needed to carry some sugary gels for a pick me up here or there. Other than that though, I’d do it all again tomorrow. Well maybe not tomorrow. Maybe in a few weeks. Or a month or two. Yeah, “next year” sounds good.

PS. The Castles & Cathedrals sportive has one of the nicest event jerseys I’ve seen and is priced perhaps a little too reasonably! I’d 100% recommend riding the event, even just for that! 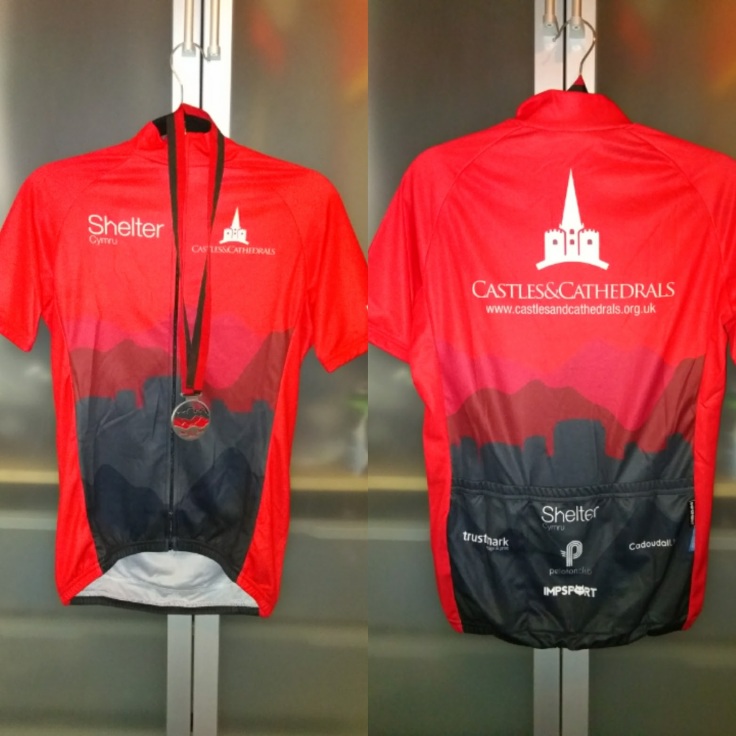