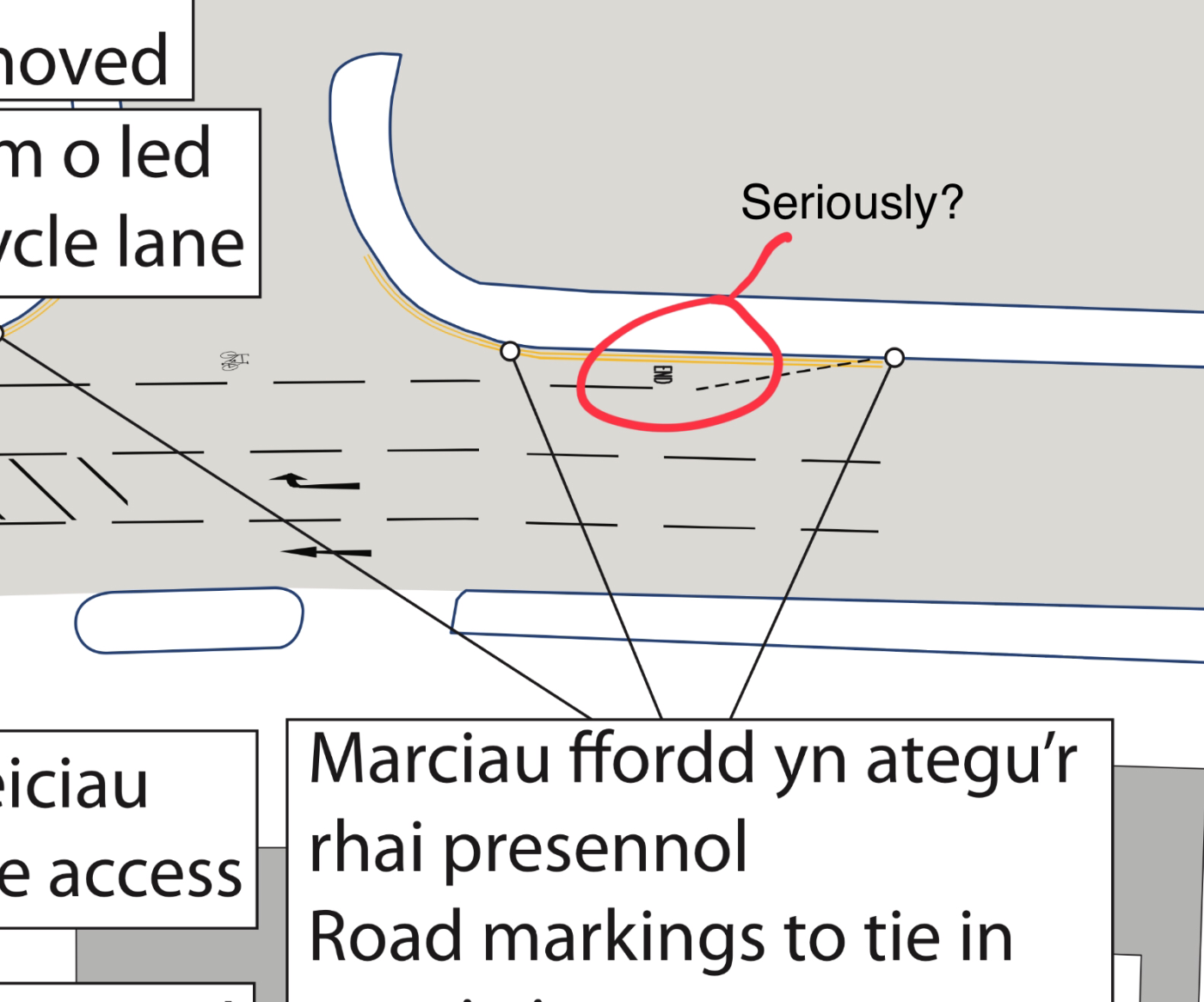 It has been a while since we’ve had a transport project to talk about. We’ve been playing a game of wait and see, hoping that the Transport Plan and the Cycling Strategy would bear fruit.

When we looked at the Cycling Strategy before it appeared to be saying a lot of the right things, but its ambition was not being translated into the Integrated Network Maps, which aside from the primary routes appeared to be kicking everything else into the long grass.

We last talked about the Maes-y-Coed Road cycle lane back in December 2015, nearly two years ago. Today we have another consultation to talk about which appears to improve the original proposal with some light segregation in the form of the red “defenders” marked on the map. This could well be those Orca cycle lane separators that have been popping up in other cities.

This shift to some sort of segregation is an encouraging sign, no doubt. However, it’s still annoying that it is taking us on a less direct route towards town and is still taking us away from the interesting parts of Birchgrove.

Whilst the idea is irksome to someone who believes we should be encouraged to do routine trips like shopping by bike, it does appear to be one the council is sticking with. It’s fine, supermarkets have ample bike parking and we don’t really need village shops and a local economy, do we…He says, rolling his eyes and muttering under his breath.

Continuing with the plant-based metaphor, there are some perennial weeds to discuss here too.

I remember the famous movie from Steven Spielberg way back in 1982. I was as amazed as most when Elliott and E.T. took flight and sailed across the sky on a bicycle. Sadly, we can’t do that, yet we are still expected to go somewhere when cycle lanes end suddenly. 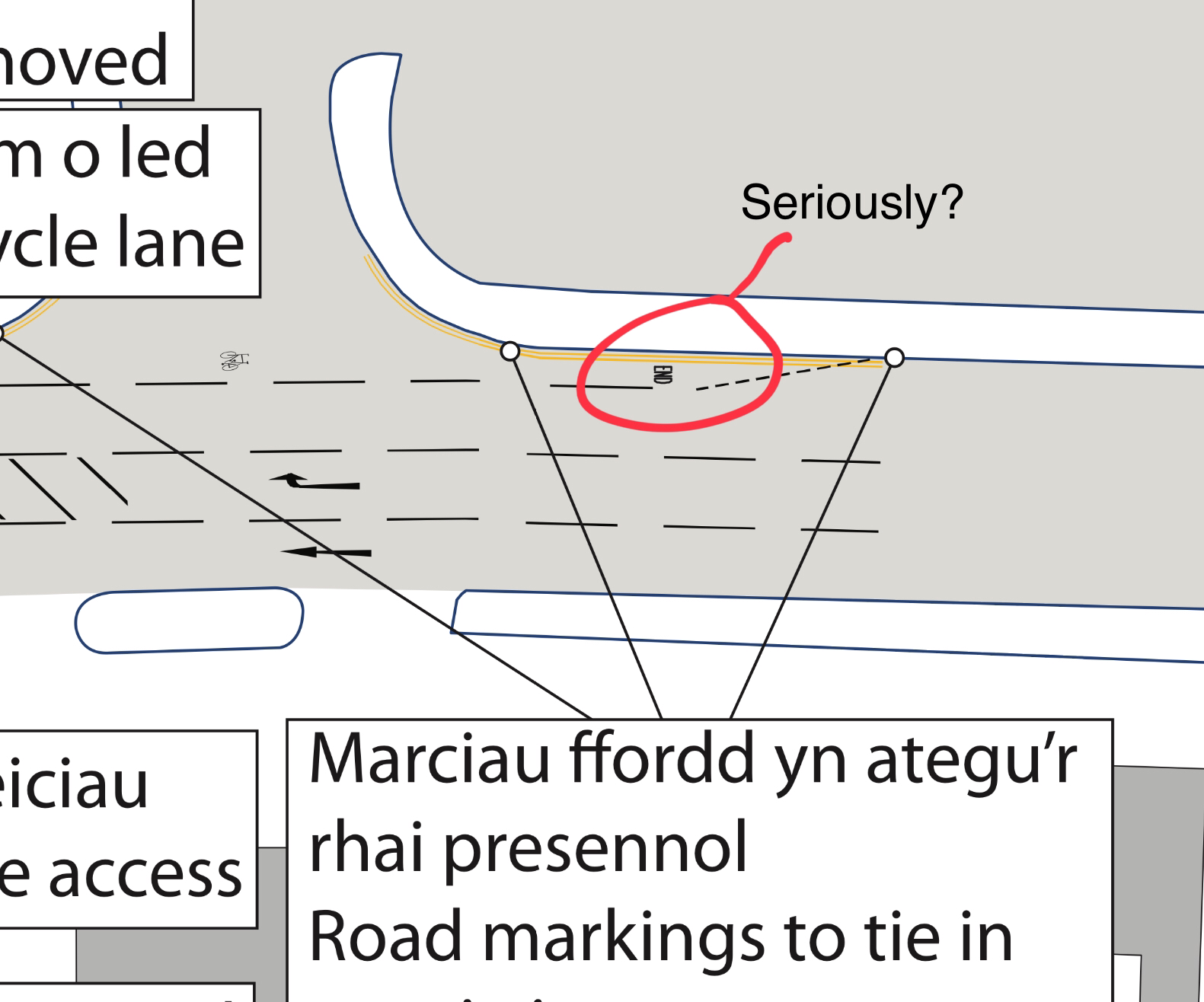 This protected cycle lane ends just after the turning for Tesco and Dominos Pizza and dumps you into regular traffic on a 30mph zone.

Would you let your child loose on it?

If a cycle lane isn’t suitable for a small child, it really isn’t suitable. The question Councillors and officers need to ask themselves with any scheme like this is, would you let your child use it?

I’d suspect that the answer here is probably no.

If this was a 20mph zone and drivers actually did 20mph in 20mph zones it may not be so bad, but they don’t. Not only that, the junction further on is far from pleasant. It’s two lanes turning left initially, with the right-hand lane providing the opportunity to turn down Heath Park Avenue and the left heading straight on to a trifecta of dicey roundabouts –Heath Halt Road, Fidlas Road and the one at the top of Roath Park.

I would be interested to know what the Council’s thinking is behind this one. Is it to link up Ton yr Ywen school, or is there a grand plan to link up with somewhere else? If it is to link up to the school, it begs the question why the lane doesn’t continue up to the entrance near Eton Court 300 metres away…

Now, the consultation document shows a closing date of 13th October 2017, yet is still listed as open on the website. It may be worth dropping them a line if you have any further thoughts on it. If you have children, you may wish to ask them to have another crack at this one…