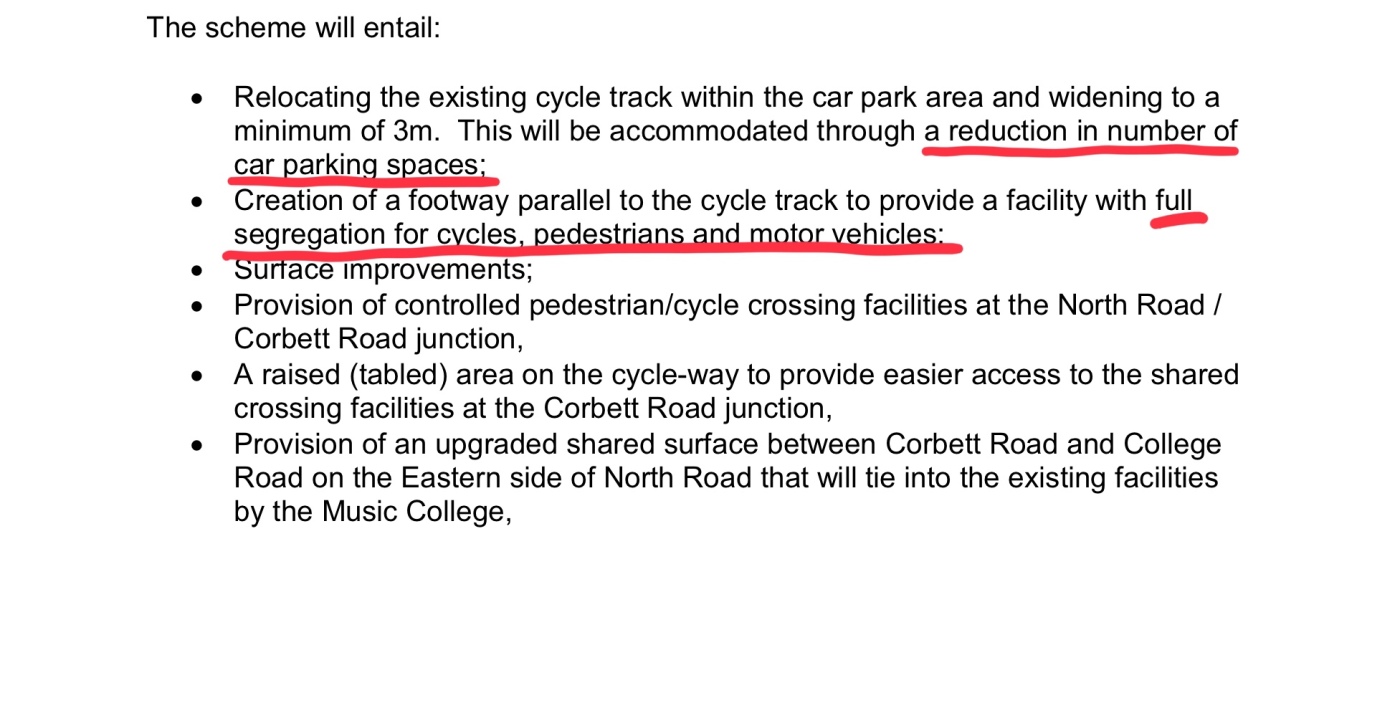 We don’t have much in the way of dedicated cycleways here in Cardiff. So rare are they that when you try to ride in one, pedestrians often look at you strangely when you calmly suggest they might want to return to their demarcated side.

One such path is on the barrage, but the other one follows North Road from the ambulance station to the castle. This is the one we are interested in today.

Whilst it is nice to have a path all of our own, it sure is rough. It sits alongside a pristine asphalt car park, all pink, lumpy and unloved. It too is often full of pedestrians but not many of us use it anyway because the car park is far easier on the spine.

The current path runs along the North Road side of the car park, separated from the traffic by a wall, however in many places there is little to separate the path from motorists attempting to invent parking spaces where there are none, as you can see in the photo up top.

So, it’s pretty safe to say a re-think was needed. 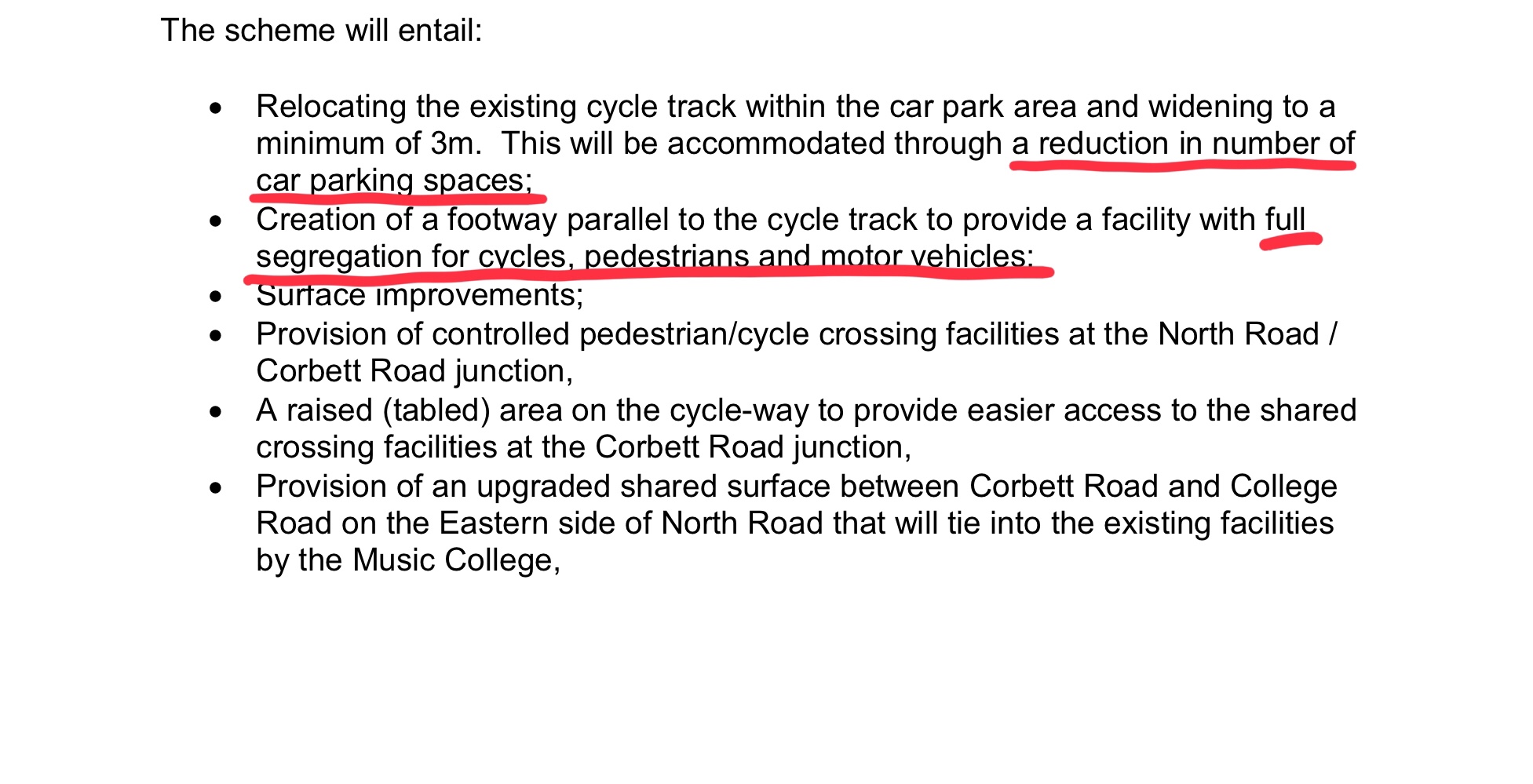 You would think that this upgrade would be a mere resurfacing job, but no. The council is planning to move it to the other side of the car park, following the hedge along the Bute Park side.

There will be a 3m cycle path to accommodate two-way traffic, separated from the nearest parking bay by a 2m raised pedestrian footway. There will then be parking bays either side of a 3m “road” for cars.

On paper this looks good. We only have two reservations. Firstly where there are trees, there are leaves and mulch. This car park is no stranger to leaves at the best of times, but at least in its current arrangement there is some separation from the flora.

Secondly, the path links up with the cycleway to Talybont and the Taff Trail. Currently they are pretty well aligned so you can hop straight across the access road for the ambulance station and continue up to the trail. In the new location there will be a dogleg if the Talybont path stays where it is. Momentum is everything when you have to do every mile under your own steam…

Before we move on, one small thing… Why are there bike racks planned for the far end of the car park? Could they not be moved closer to the town end? They’re too close to Talybont for the students, but too far from everything else to be particularly useful. 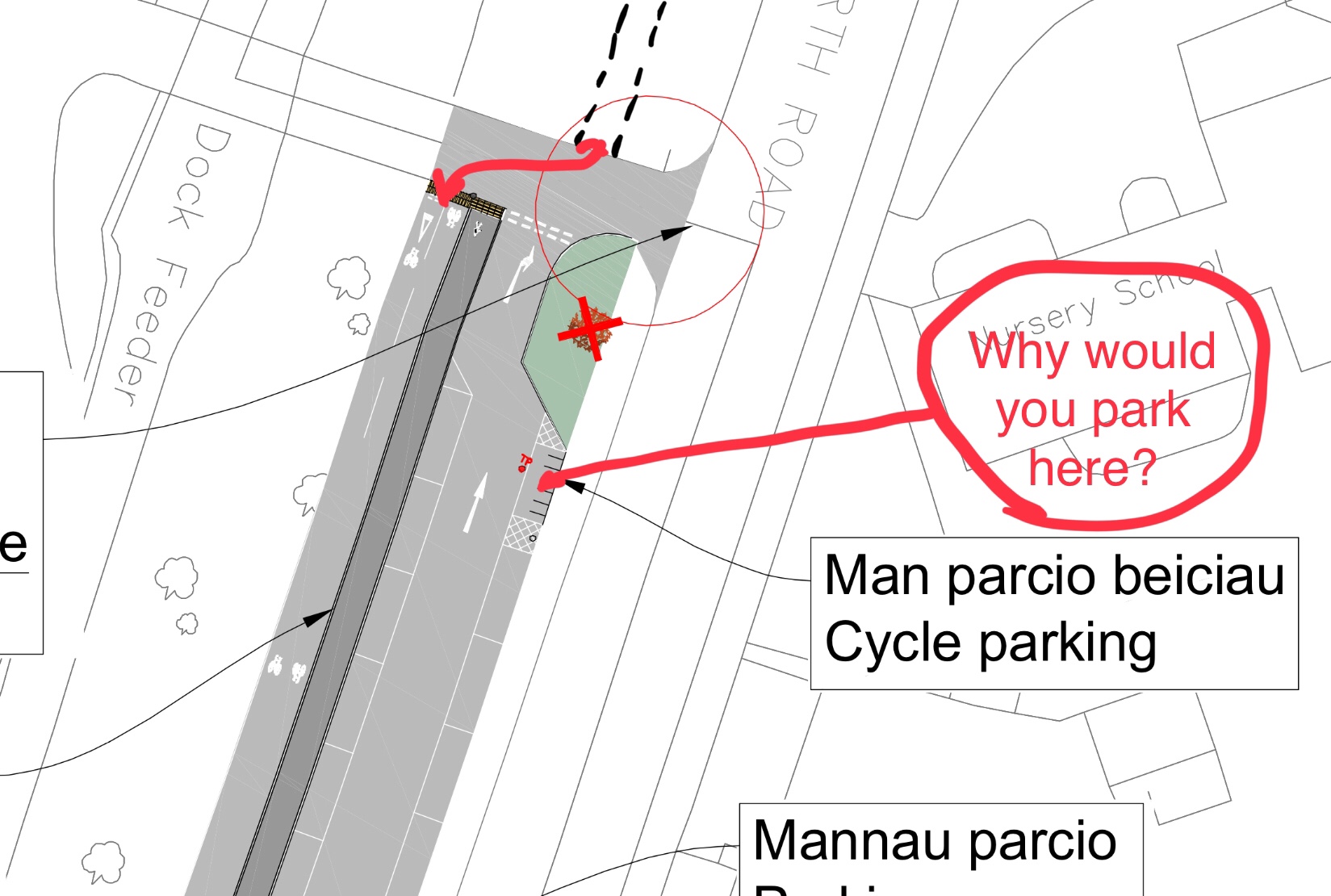 The other part of this project is Corbett Road and its junction with North Road. The idea being that users of the North Road path can easily navigate North Road to access Cathays…and vice versa.

On the surface this looks like a big improvement. With that said, it wasn’t long before the comments started to flow on social media. There are a few questions that we would like answered and perhaps some things that need to be looked at. So, we made merry with the red pen…

Annoyingly, there’s some old habits creeping in here. Now, Corbett Road is a pretty busy road at most times of the day, given that it links Cathays with one of Cardiff’s busiest arteries. It queues along much of its length at peak times and that doesn’t look like it is going to change.

Frustratingly, whilst the Cathays end of Corbett Road is a mandatory cycle lane, the sticky end where traffic often queues to get out of Cathays Park is only an advisory lane. It does however become mandatory again as you approach the lights and the Advanced Stop Line.

If you are familiar with this road, ask yourself if the protection offered here is sufficient that you would be happy to let your child or loved one use it. If not, you really need to let the council know.

The council is planning to finally add crossings at these traffic lights. Until now people have been hopping from one traffic island to the next to access the car park and the bus shelter.

To accommodate these crossings an extra “all red” phase will be added to the lights. There will also be dropped curbs to access the crossings for those of us who get around on wheels, be that bicycles, wheelchairs or mobility scooters –the often forgotten beneficiary of investments in cycle infrastructure.

Overall the plan seems OK. Not brilliant, but it’s certainly a good start. Some more protection on Corbett Road would be nice, not to mention some reassurance that the new path on North Road is going to be maintained so that it doesn’t become a liability during the autumn and winter.

Still, the council needs YOUR views rather than ours. Have a read of the full consultation and drop the Transport Projects mailbox a line with any comments or thoughts you have by the 8th December 2017.