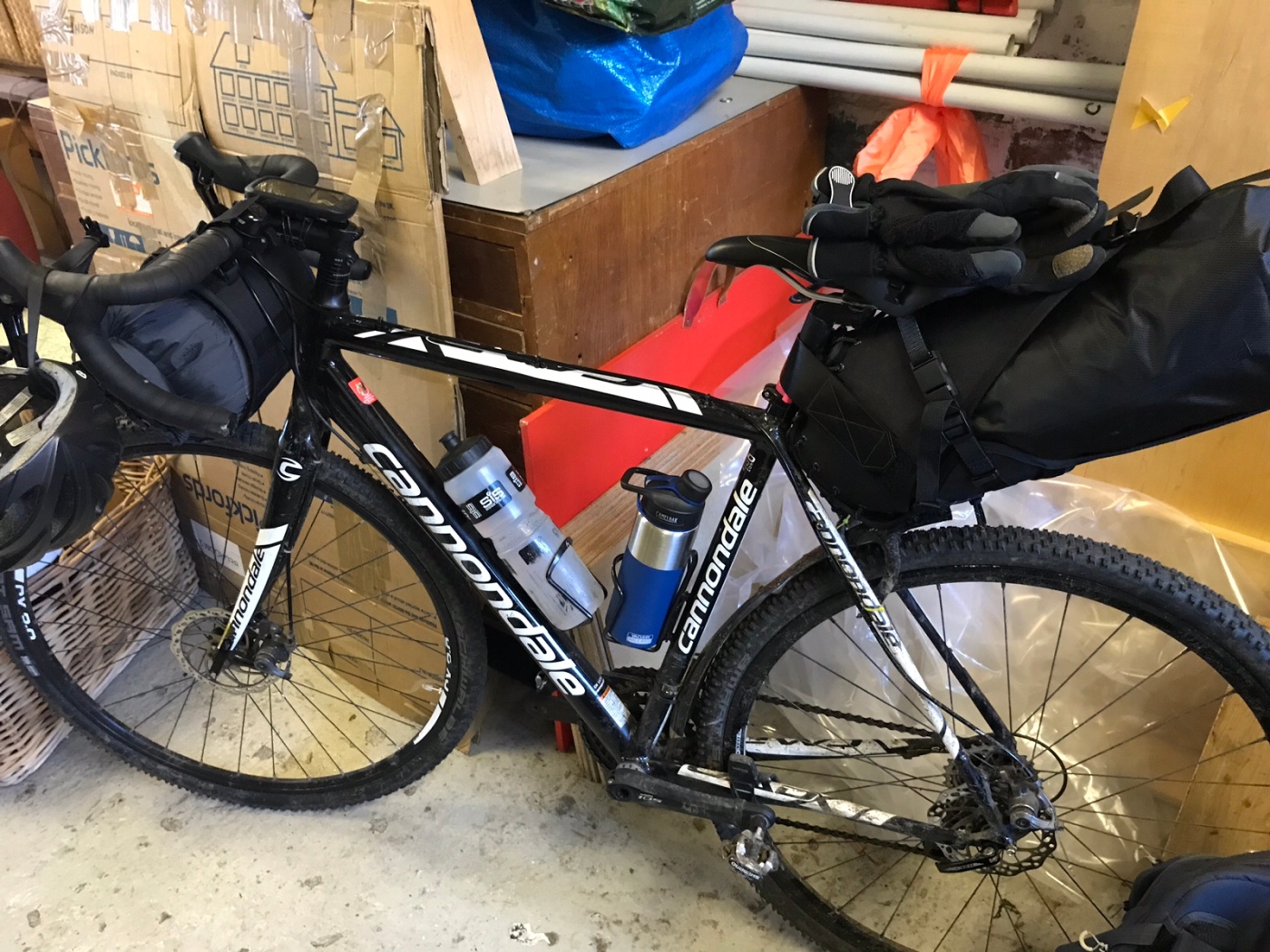 Our minds are capable of some amazing things. Not only does it keep the body functioning day to day, it can achieve great feats of ingenuity and analytical thinking.

As some of you regular readers may have worked out, I have a love/hate relationship with my brain. Today is a story of a time when it really let me down.

At the beginning of last year my friend Dave and I hatched a plan to go bike packing. Having binge-watched nearly every adventure & backpacking movie I could find, this was something I really, really wanted to do.

I started acquiring bikepacking gear gradually. I started with a frame bag, figuring it would be useful for Audax as well; followed by the seat pack and then the handlebar bag.

The frame bag was from a UK company called Restrap. I was so impressed with the quality and the fact that it was handmade and completely black that I decided to stick with Restrap for the rest of my kit. I now have a set of matched luggage –a set of black bikepacking bags to go with my black bike.

As time moved on we set a date to go camping. As it turns out, this was February. Yes, February, the middle of winter. We planned to visit the bothy just 10 miles north of Abergavenny. The weather forecast was suggesting it would be dropping to around 0 degrees celsius at night and not much higher than around 5 during the day.

I knew that my sleeping bag was more of a spring/autumn sort of bag and that I would probably be turned into a block of ice, so considered it wise to invest in a better sleeping bag. I did splurge a bit, but considered it worthwhile to avoid re-enacting scenes from the movie ‘Alive’ on the outskirts of Abergavenny, without the cannibalism, obviously.

At this time things were starting to get a bit weird. For most of us our moods exist on a spectrum, with elation at one end and crushing despair at the other. However, there are usually many, many degrees, or shades of colour in between –rather like the sort of colour chart you’ll find at the hardware store when you are trying to buy paint.

However, my mind had been becoming a lot more binary and in October I was really starting to struggle. I was either elated or completely hollow. There would be days where I felt on top of the world, but others where I struggled to function. Days where I would somehow make it to work and nothing on my computer screen made any sense.

After a visit to the doctors I found myself with a treatment plan, but a few months of adjustment ahead of me. A few weeks I was starting to have more good days than bad and looked forward to getting back to normal again.

So, I had all the gear I needed; the bike was ready and I was packed & ready to go. It was cold, but I felt prepared and set off to meet Dave.

One slight complication with this particular bothy we were going to is that there’s not a lot of forestry nearby, so picking up firewood would have been a challenge. Fortunately, Dave had some so we loaded up extra rucksacks with firewood and set off from his workshop in Riverside.

We were a little late setting off, but decided to head up the trail to Caerphilly to join NCN route 4 across to Newport to take the canal path north towards Pontypool.

The bike was heavy; the but we were carrying backpacks full of firewood as well. I was struggling to balance the need to be warm enough, but also cool enough to keep riding.

I was also a lot more unfit than I thought. As you know, I hadn’t been riding much in the weeks leading up and today the reality of that was starting to hit home. I reached Bassaleg and I could feel my mind starting to turn.

I’ve been cooked many times before. Going back to 2016 I rode a 200Km Audax to Gloucester and back. By the time I reached Symonds Yat, roughly two thirds of the way through, my back was screaming and I had to lie down for half hour in the woods between the Yat and Monmouth, then once again just outside Mitchell Troy, on a patch of grass at the side of the road.

Fast forward to today and I could feel my now binary mind start to turn. We realised we weren’t making such good time and it would most likely be dark soon. We were still shy of Cwmbran and so hatched a plan to catch up by getting the train from Cwmbran to Abergavenny.

That was it, my brain saw the gate open just enough to barge through it. It sensed a way out and it was going to take it. I call it ‘it’ because it felt as though my brain had it’s own agenda.

“I” had spent a great deal of time preparing for today; I was really looking forward to having an adventure with my mate, but ‘it’ wasn’t having any of it. ‘It’ wanted to go home, to curl up into bed and hide.

We often forget that our bodies are finely balanced machines; that bodies and minds need to work in harmony to get things done. Without managing our minds it matters little how much training we do, if our minds are going to let us down when we need them most.

Equally, we ignore our physical health at our peril, particularly as many of us will rely on our minds to put food on the table. Sadly, our brains don’t always have our best interests at heart. In our Wants vs Needs post we talked about why want we want is often at odds with what we need. I needed to carry on, to ride my bike and to to have the adventure I’d been picturing in my mind for months. My brain just wanted to go home.

As humans we often know what we actually need. We know we need discomfort; to challenge ourselves; to have new experiences and to be sociable. We know that we need to get outside into the open air; to work up a sweat and to keep learning and evolving by doing things that challenge us.

The hardest part is overcoming the voice inside your head that says no. It’s often the same voice that tells you not to get help; that you can figure things out on your own, or that you can carry on as you’ve always been because the alternative seems scary.

One thought on “Your mind makes it real…”