As a society we’ve become very good at overlooking the costs of many things, whilst quibbling over every last penny of others.

One thing we are especially good at brushing under the rug is the cost of motoring, not just to our own wallets but to society as a whole.

When someone is hit by a motorist, they’re very often swept up in an ambulance or at the very least sent to A&E for an X-ray. The NHS then has to mend any broken bones; the council has to repair street furniture or anything else damaged in the collision; and the lawyers have to deal with any personal injury claims or or any other proceedings that need to take place.

This stuff isn’t cheap, but nor is removing someone’s limbs because they’ve developed type-2 diabetes and neuropathy has started to set in.

Thanks to our excellent NHS, whatever your reason for entering hospital you don’t come away with an eyewatering bill to add to your aches & pains. Instead your bill goes into what appears to be a black hole, but is in essence removed from the money that is available elsewhere for other ticking time bombs –mental health & yet more cases of type-2 diabetes, obesity and other avoidable health problems.

Whilst it is accepted that this is an approximation and may vary according the distribution of population it does show that put against the annual casualties and physical inactivity costs, the one-off cost of 20mph limits is minimal and typically less than 1%.

These calculations are available in a spreadsheet which you can download here.

via Casualty and Physical Inactivity Costs – 20’s Plenty for Us

The Department for Transport (DfT) has a calculation which assesses the costs of fatal, serious and non-serious casualties for each local authority, including Cardiff. I’ve taken a screenshot of the spreadsheet for your convenience, but heading over to 20s Plenty linked above you can explore the spreadsheet yourself. 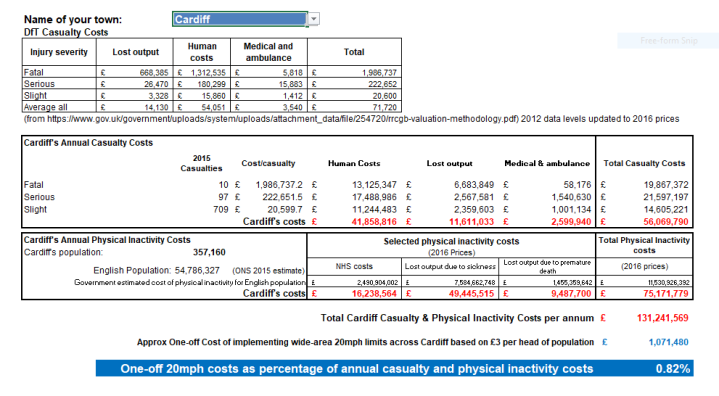 As you can see, in 2015 the annual cost of casualties and inactivity for Cardiff alone was £131,241,569. This is based on 10 fatalities; 97 serious injuries and 709 slight injuries. The spreadsheet also calculates the lost output due to sickness and premature death as a result of our increasingly sedentary lifestyles.

For comparison, the Council’s entire Social Services budget is £166 million, or 65% of its annual budget. This is not an inconsequential amount of money. The Council receives £165 million from council tax, with the rest coming from grants and fines etc.

However, these costs are shared between the public sector as a whole –the council; South Wales Police; the Cardiff & Vale University Health Board and any other organisation called upon to deal with the mess.

We need to be asking some serious questions. With limited funds and with budgets shrinking in real terms year on year, do we really want to keep throwing good money after bad; or do we want to make sure our parents and grandparents are looked after in their old age; that mental health services are adequately funded and the NHS has the resources to deal with our ever-ageing population?

Some swift action is needed to kick our motoring habit. We need to stop “encouraging” and start poking hard with a poThe debt trap – or, what you give up to own a car…inty stick. We can’t keep throwing good money down the toilet on a pursuit that has virtually no upsides. A pursuit that is making us all ill, lazy and poor.

One thought on “Counting the cost of casualties and inactivity…”